YouGov survey reveals Indians perceive SBI as the most patriotic brand in India, followed by Tata Motors, Patanjali and Reliance

A new YouGov survey reveals the most patriotic brands in India and defines the meaning of patriotism as described by Indians. The survey covers 152 leading brands in 11 categories.

The word patriotism holds a different meaning for different people. Almost all respondents believe they are patriotic. 42% feel they are as patriotic as their parents and 32% would want their children or the future generation to be more patriotic than them. 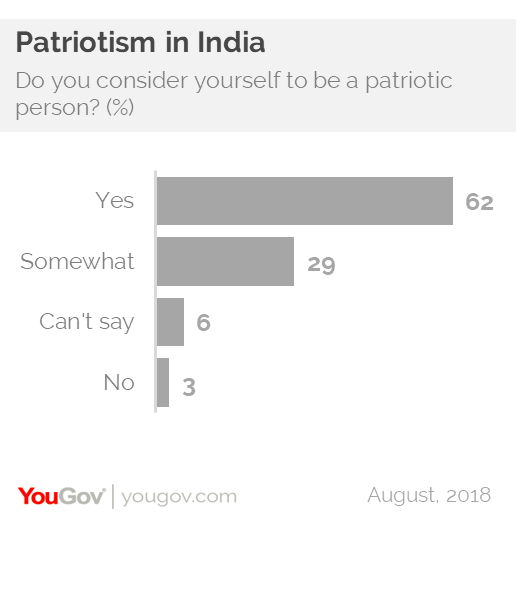 Are Indians proud of their country?

55% people are proud to be Indians, the rest (around 43%) are proud but also feel sorry for the general state of affairs. However, given a chance, 45% of Indians would consider moving out of the country.

Mutli-cultural, agricultural, historic, beautiful, traditional, spiritual, are some of the words people associate with India. However, while all this sounds very positive, around a fourth of the population would want the country to be a safe place to live in.

Indians have many ways of showing their love and loyalty towards their nation. 60% Indians pay taxes on time as a contribution to the nation’s development and 68% stand up during national anthem as a mark of respect. Close to three- fourth Indians are proud of their armed forces and believe it is their duty to protect public property.

Priyanka Chopra, Sundar Pichai, Manushi Chillar, Lakshmi Mittal, Indra Nooyi, are some of the global personalities that Indians have heard of or are likely to know about. 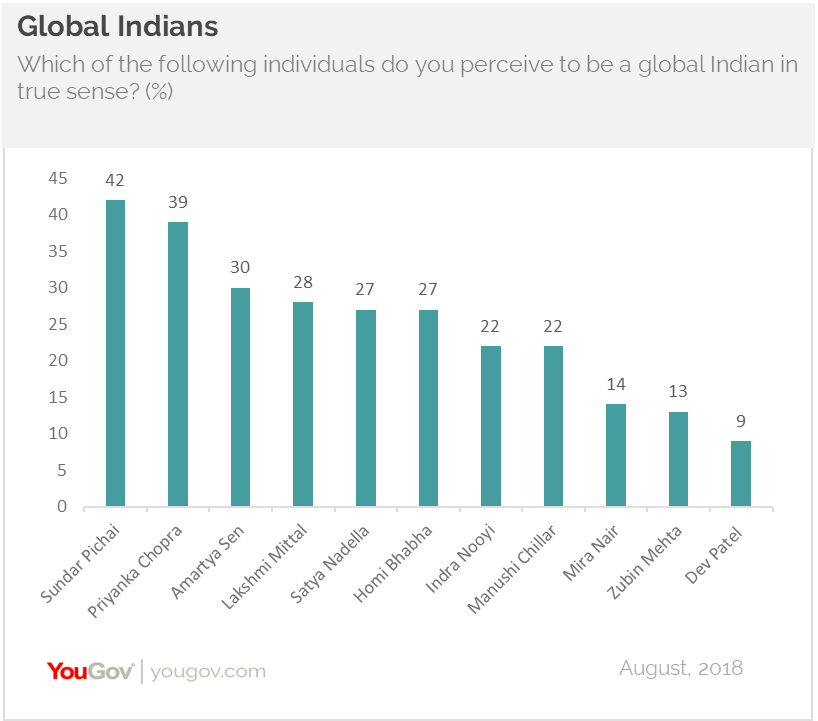 In a country obsessed with Bollywood, there is no surprise Priyanka Chopra soars high in the list of global Indians. But it is actually Sundar Pichai, CEO of Google, who Indians believe truly embodies the virtue of a global Indian. Amartya Sen, Lakshmi Mittal, Satya Nadella, Manushi Chillar are some of the other names that people believe deserve to be called global Indians.

In India, purchase decisions are fuelled by emotions as much as they are by need and satisfaction.  And patriotism is one such emotion. The survey also showcases brands that are perceived to be the most patriotic by Indians.

In a fresh reveal the State Bank of India is perceived to be the most patriotic brand in India, followed by Tata Motors and Patanjali. According to the survey, the financial sector tops the chart with two leading brands (SBI and LIC) in the list, followed by auto, consumer goods, food and telecom sector.

Tata Group maintains its steady positive perception in the minds of Indians and continues to win more hearts. In the auto sector, Tata Motors (30%) stays ahead of Bharat Petroleum (13%) and Maruti Suzuki (11%) and in the beverages category Tata Tea is a clear winner.

Paytm beats internet/ tech giants Amazon (16%) and Flipkart (22%) to be the most patriotic brand in this sector with one-third Indians believing the same.

Nirma stands out to be the most patriotic in the homecare products category. The brand resonates with people not just because of its affordable pricing but its successful ad campaign with the iconic dancing girl. It is likely that the emotional connect with the brand makes a fourth of Indians perceive Nirma as the most patriotic brand in this group.

Patanjali dominates the personal care space with one in three respondents recognizing it to be the most patriotic brand. The consumer brand which launched in 2006 stays ahead of brands like Dabur and Vicco who have been in the market since time without beginning. Not just this, Patanjali Dant Kranti is ahead of Colgate, Dabur Red and Vicco Vajradanti to be the most patriotic brand in the oral care sector.

Data collected online by YouGov Omnibus among 1,193 respondents in India between 2th August and 8th August, 2018 using YouGov’s panel of an online representation of India.