YouGov's latest survey shows almost all urban Indian respondents believe they are patriotic to some extent. While 42% feel they are as patriotic as their parents, 32% would want their children or the future generation to be more patriotic than them.

Are Indians proud of their country?

55% of people are proud to be Indians, the rest (around 43%) are proud but also feel sorry for the general state of affairs. Having said that, given a chance, 45% of Indians would consider moving out of the country.

Mutli-cultural, agricultural, historic, beautiful, traditional, spiritual, are some of the words people associate with India. While there are a lot of positive feelings, around a fourth of the population would want the country to be a safe place to live in.

When it comes to showing their love and loyalty towards their nation, 60% of Indians said they pay taxes on time as a contribution to the nation’s development and 68% stand up during the national anthem as a mark of respect. Close to three-fourths of Indians are proud of their armed forces and believe it is their duty to protect public property.

Sundar Pichai tops the list of global Indians with 42% of urban Indians saying that. Indians are respected globally for their technical proficiency and talent. However, the mega-talented CEO of Google has given India one more reason to laud its expertise in the global IT sector.

It is not new for Indians to make such strides in the business and technology world. Satya Nadella created history by being the first Indian to head one of the world’s biggest software companies. 27% Indians feel he is truly a global Indian.

In a country obsessed with Bollywood, it is not surprising to see Priyanka Chopra feature in the list of global Indians. The former Miss World has made her mark not just as an A-list actress, singer, and producer but also as a global icon.

Amartya Sen parks at the third spot on the list. The Indian economist and philosopher has taught in India, UK, and US and has even won a noble prize for his exemplary work.

Steel mogul, Lakshmi Mittal closely follows Amartya Sen. The UK-based Indian CEO of the world’s biggest steelmaking company has put India on a global pedestal. Not just in India, he is widely recognised internationally for his business acumen and vision. 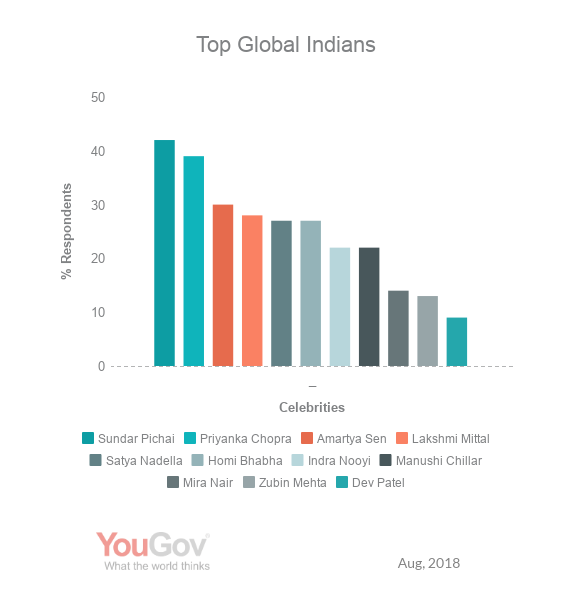 While the whole nation is shocked to learn the news of Indra Nooyi’s exit from PepsiCo, close to a fourth of people believe she truly embodies the virtue of a global Indian.

Miss World Manushi Chillar is winning hearts locally and globally. Her win ended the 17-year drought and has made India the country with the most number of Miss World crowns. Recently, she also appeared on the list of India’s most admired people.

Mira Nair, Zubin Mehta, and Dev Patel are some of the other names that people believe deserve to be called global Indians.

Data collected online by YouGov Omnibus among 1,193 respondents in India between 2nd August and 8th August, 2018 using YouGov’s panel of an online representation of India.