It has been over a month since Swedish home furnishing giant IKEA opened its first store in India. Not only did the brand receive a bumper opening but it also surpassed its sales expectations. A new YouGov India survey reveals consumers’ home décor and purchase preferences and their willingness to switch from local, traditional showrooms to a newer concept, build it yourself furniture stores.

Majority of people (68%) said they are excited about Ikea’s entry into India and hope it will fill the gap in the market with a wide range of affordable, design-oriented products, with better quality and supreme customer service. 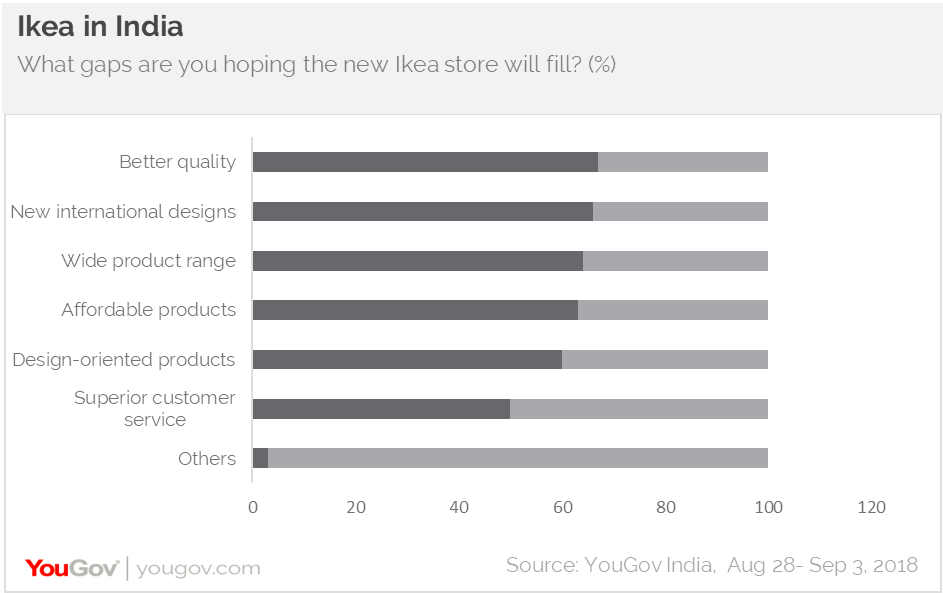 Over half of the respondents stated they are willing to consider DIY furniture stores over full service showrooms in the future while 32% are unsure. A small segment (14%) said they are unaware of the meaning of DIY furniture and are not ready to change their minds. However, the data suggests that assurance of better quality and a step-by-step guide or demo kit, will help in making this switch easier. 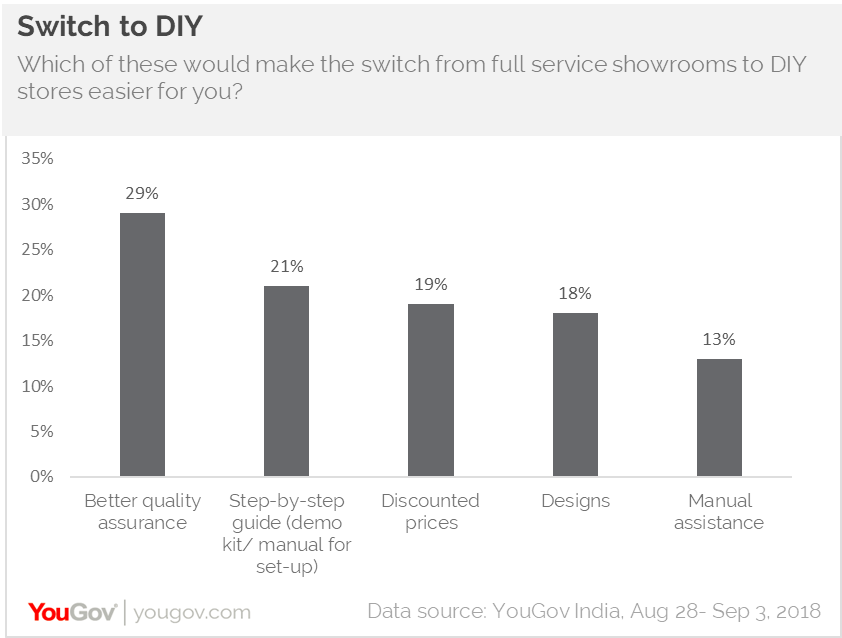 YouGov India showcased multiple interior design styles to our panellists to see which reflects their interior choices. ‘Contemporary’ styling won the preference ratings followed by ‘Modern’ and ‘Mid-century Modern’ styles next in line, with 28% respondents picking that as their preferred style for their homes. Only 16% chose traditional, Indian interior design styles suggesting that people today are more accepting of western styles over a traditional style. Not just the millennials, even the older generations indicated this.

Bedroom (38%) and living room (33%) are people’s favourite spaces in the house, with men preferring living room while women favouring the bedroom. However, if they had the funds to splurge, 43% people indicated spending on furnishing their living room, followed by bedroom.

45% said they are always on a lookout for pieces to improve the look of their house and do not mind spending if they find something good. 36% make spontaneous purchases sometimes but don’t buy anything too expensive that often, while 19% said they don’t spend too much spontaneously and only buy when necessary.

57% people stated they get their home décor inspiration from social media, similar trends for both men and women. A little over half of the respondents (52%) stated their family and friends inspire them to decorate their homes followed by up to half (48%) stating lifestyle magazines and travel & lifestyle shows (43%) as their source of inspiration for home décor. While Gen Y chose social media, GenX chose family and friends.

56% would hire an expert or designer to handle their interior designing, if cost is not a barrier, but 44% would like to do it themselves. 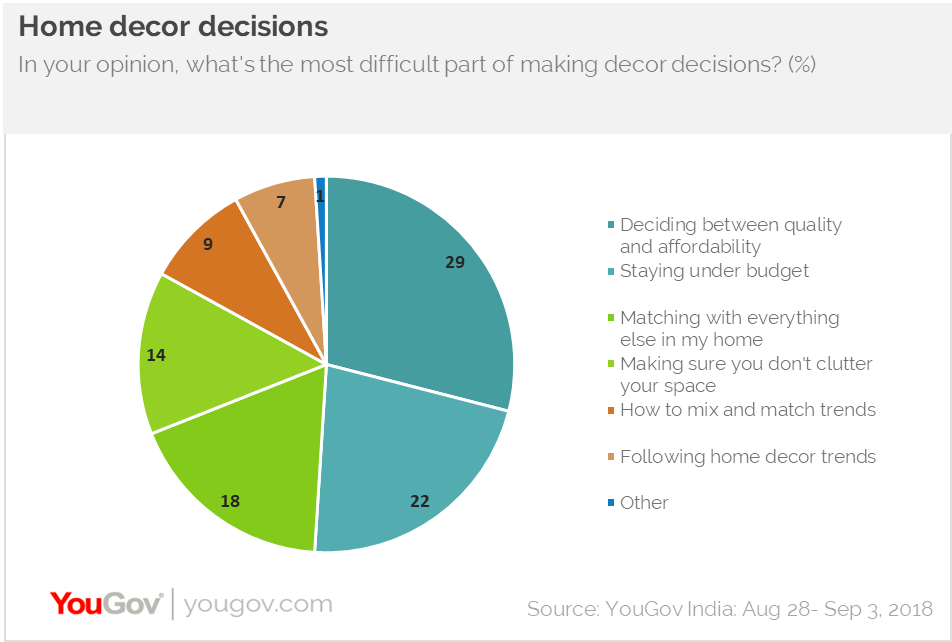 Staying in budget and deciding between quality and affordability is pointed out as the most difficult part of making décor decisions. Close to half of price conscious Indians (43%) indicated shopping during the festive season to get the best value because of good discounts. More married people made this claim compared to singles.

36% people said they are happy to travel a distance to find the best stuff for their homes while only 27% people indicated buying furniture from local stores near their homes. Close to a quarter of people shop for furniture online, mostly buying soft furnishings like bedsheets and curtains, home décor accents like cushions and rugs and art pieces like paintings, wall arts, etc.

For those who do not shop furniture online, apprehensions about quality, no confidence in customer service and shipment issues are the key barriers for not wanting to do so. 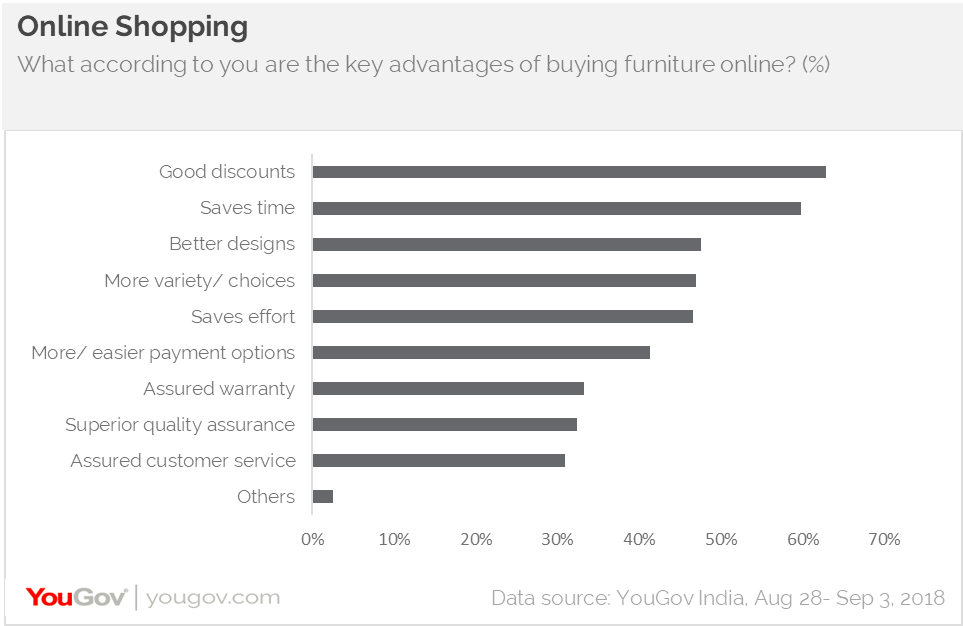 Godrej Interio, Pepperfry, HomeTown and Urban Ladder are some of the offline and online stores that people have specified purchasing furniture from. Married people indicated buying more from physical stores like Godrej Interio and HomeTown while singles mentioned shopping more online from stores like Pepperfry.

Commenting on this, Deepa Bhatia, Country Manager, YouGov India, said, “YouGov data shows that interior design styles and choices in India are changing fast and brands that want to tap this booming business vertical need to understand these changing consumer preferences to better design their offerings. Our data suggests that a large segment of people like to decorate their homes by themselves and are also willing to try out DIY furniture. Marketing to these consumer segments today requires brands to become more agile, more personalized and move online.”

Data collected online by YouGov Omnibus among 1,001 respondents in India between August 28- September 3, 2018 using YouGov’s panel of over 6 million people worldwide. Data is broadly representative of the adult online population in the country.