Sexual harassment is a grave problem deep rooted in our culture and society. It is not a women’s issue but a gross violation of human rights. YouGov India’s #MeToo survey reveals more than three-fourth urban Indians believe sexual harassment is a very serious problem, with a higher proportion of younger respondents (18-39 years) saying that compared to the older generation (40+ years). Bollywood emerges as the topmost industry believed to be prone to sexual harassment, followed by politics.

For majority of respondents, getting physically intimate without consent and sending texts or images of a sexual nature are perceived as top forms of sexual harassment. The debate on rape culture and consent has spread wide from colleges and offices to newspaper headlines. 43% believe not taking NO for an answer is also sexual harassment, where over half the women (52%) agree with this statement whereas only 35% of men think this way.

Close to half the respondents (43%) know someone who has been a victim of sexual harassment and a little over a third (36%) are aware of someone who has been accused of the same. Talking about their personal experiences, nearly half of the female respondents claimed to have had someone brush-up against them or touch them in an unwelcoming way. An equally high number also claimed to have faced verbal abuse.

1 out of 3 women admitted to being stalked and receiving text/ social media messages of sexual nature
Notably, the rate of incidence of such cases is higher in tier-1 cities as opposed to smaller towns. This indicates that despite being presumably more developed, metropolitans are way behind when it comes to women’s safety.

The #MeToo Wave
Majority of people are aware of the #MeToo movement, and almost two-third (64%) of these appear to be supporting it. Although half the surveyed population agrees that women sharing their harassment stories is an inspiration to the society, there is a small segment of men (25% of the respondents) who believe that this movement has blown way out of proportion and is being manipulated to wrongly accuse men. Interestingly, 20% of the respondents also believe that it’s just a global trend, and will die down soon.

#MeToo movement has started a revolution and made men watchful of their actions. In terms of the expected impact, at least 1 in every 3 people agree strongly that it will help make a long-lasting impact in improving the lives women in the country. This number is consistent for both men and women. 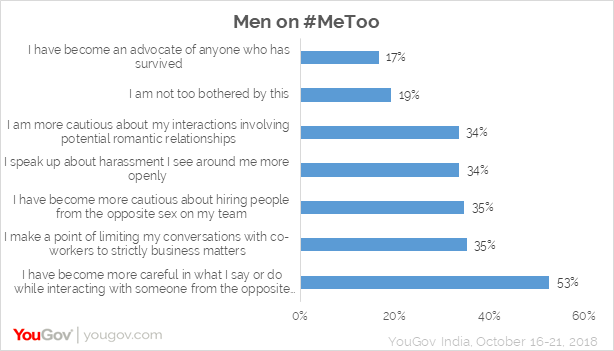 On the contrary, it may not have had a very pleasing impact on men. 1 in every 2 men agree that they are more careful while interacting with someone from the opposite sex while 1 in every 3 men agree to limiting their conversations with female co-workers to strictly business matters, out of the fear of being misinterpreted.

On a more negative note, over one-third men reported being more cautious about hiring people from the opposite sex on their team. Hence, while there is some sense of positivity towards the movement, it is difficult to completely rule out the thought that it may have unintended consequences for women, especially in the workplace.

Lastly, in a shockingly interesting reveal, a sizeable 37% of the men have claimed that if there was a #MeToo movement for men, they will have a story to share as well.

Data collected online by YouGov India among 1,006 respondents in India between 16th and 21st  October, 2018 using YouGov’s panel of an online representation of India.