The modern day consumer cares about a brand’s products often as much as they care about what a brand stands for, what the brand does and what it communicates. As mainstream brands progressively move towards communicating their position on social, community and even political issues, through advertising, messaging and influential celebrity endorsements, YouGov looked into what consumers feel about this approach.

A recent YouGov survey reveals more than three-fourth (76%) surveyed respondents feel it is important for brands they like/follow to have a point of view on issues related to society. This comes across as being more important amongst people aged above 30 years (80%) as compared to those who are under 30 (72%).

Interestingly, over half the respondents believe that brands should take a stand only on issues that are either relevant at the moment (58%) or that are relevant to the brand itself (52%). On the other hand, a third (34%) feel brands should refrain from expressing their views on political/ social issues. This emerges strongly for those in the age group of 18-29 years, with 37% of them looking at this in a negative light. 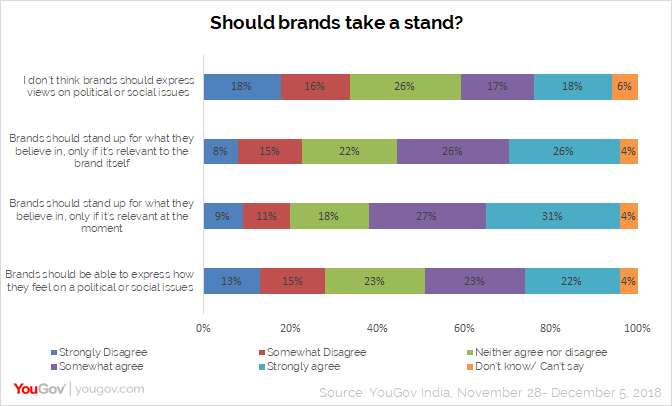 Why should brands talk?

When asking those who feel it is important for brands to have an opinion on society-related issues, three-fourth respondents feel brands are obliged to do so as they are able to reach out to the mass public. Close to half said they want to know who they are giving their money to (47%) and like to support brands that share similar values as theirs and lastly they like those brands that aren’t afraid to say what they think (44%). Consumers put a lot of emphasis on their personal values and this association extends to their choice of brands as well. Close to a quarter (23%) stated turning away from businesses who have values they disagree with.

Speaking about celebrity endorsements, around 60% respondents believe a celebrity’s stand on a controversial topic can impact a brand they endorse. 46% went on to say they would distance themselves from a brand whose endorser is involved in a controversy. This thought is dominant among men (48%) and those above 30 years old (51%).

What should brands talk about?

Environmental issues, Education, Human rights and Health awareness emerged as the top areas respondents find acceptable for brands to communicate their point of view on through marketing campaigns. Women felt more strongly about these issues compared to men. It is interesting to note that for a little over a fourth of young adults (27%) in the age bracket of 18-29 years, LGBTQ rights is an area they would like brands to express their views on.

Political opinions are the least favoured area for people to accept a brand’s stand on, and this was resonant across all demographics.

Talking about their own behaviour towards brands that take a stand on certain issues, close to 60% claimed they would be more likely to buy from brands that express views they are personally in agreement with. This was the strongest among the 30+ demographic (62%) and women (61%). 56% also feel it will enhance their loyalty towards the brand and would make them publically praise the brand. Interestingly brand loyalty goes further than just the love of a product, with 49% indicating that a brand’s opinion on a specific agenda could influence their opinion.

So should brands take a stand?

While there is strong support for brands voicing their opinions, 63% also believe that brands are guilty of taking advantage of social issues to promote themselves and exploit their audiences, with women feeling this more strongly compared to men. For a little over a quarter, trusting a brand’s point of view depends entirely on the social/ political issue at hand (28%) and the fact that they promote a message regardless of the overall impact on the brand itself (27%).

Lastly, when it comes to taking a stand on an issue, consumers in India would like to see brands sharing examples of their support/ action towards the social causes (46%), followed by brands rolling out marketing campaigns in support of the cause (44%) and finally encouraging followers to take action (44%), come out as the most effective ways for brands to take a stand.

To conclude, although people do want brands to take a stance on issues affecting society, they would want to see more action taken by the brands towards a cause rather than them just advocating a message around it and adding to the noise. Interestingly, the 30+ year olds hold very strong opinions on whether brands should take a stand on issues and there clearly lies a gap in trust with 66% stating brands take advantage of social issues for publicity. People belonging to this demographic hold their values close to them and their purchase decisions are influenced by the same. They are more likely to buy from brands that express views that they personally believe in (62%) and 46% went on to say they would stop buying from brands that have views they disagree with. So strong is their value set that they would even distance themselves from brands whose celebrity endorsers are involved in controversies.

Commenting on this, Deepa Bhatia, general Manager, YouGov India, said, “Our data suggests that while a majority of the people like a brand to take a stand on issues affecting society, they also display a lack of trust on the brands’ true intentions while doing so. Overall, it appears consumers want brands to take action and establish their stand on an issue, rather than just advocating a message. Indian consumers hold their value systems close to heart and are more likely to purchase from brands whose views are aligned with their personal beliefs and values. It is therefore crucial for brands to understand the value systems their target audience is most likely to associate with and to use data to choose not just the right message and action but also the right brand ambassador.”

Data collected online by YouGov Omnibus among 1,010 respondents in India between 28th November-5th December, 2018 using YouGov’s panel of over 6 million people worldwide. Data is broadly representative of the adult online population in the country.