Mothers in India are becoming adopters of technology, with young moms emerging as the more tech-savvy mothers

Around 8 in 10 mothers in India (79%) agree with the statement that ‘technology has made parenting easier’, YouGov’s new survey reveals.

On the occasion of Mother’s Day, we asked mothers in India whether technology has helped them with parenting and what is their biggest fear with regard to raising a child in a digital age.

The survey shows that young mothers (whose children are between newborn to up to 3 years of age) are more embracing of technology and feel more positively about it as compared to the slightly older mothers (with children aged above 4) in India. (87% vs 77%)

Having said that, both sets of mothers have used some form of technology for parenting and wish to use more in the future. Unsurprisingly, the smartphone is the most widely used device for parenting, with 7 in 10 mothers (69%) claiming to have used it for their children. Even though the majority have used it, not many seem happy with it and only nearing 2 in 5 (38%) would recommend it to their family or friends. 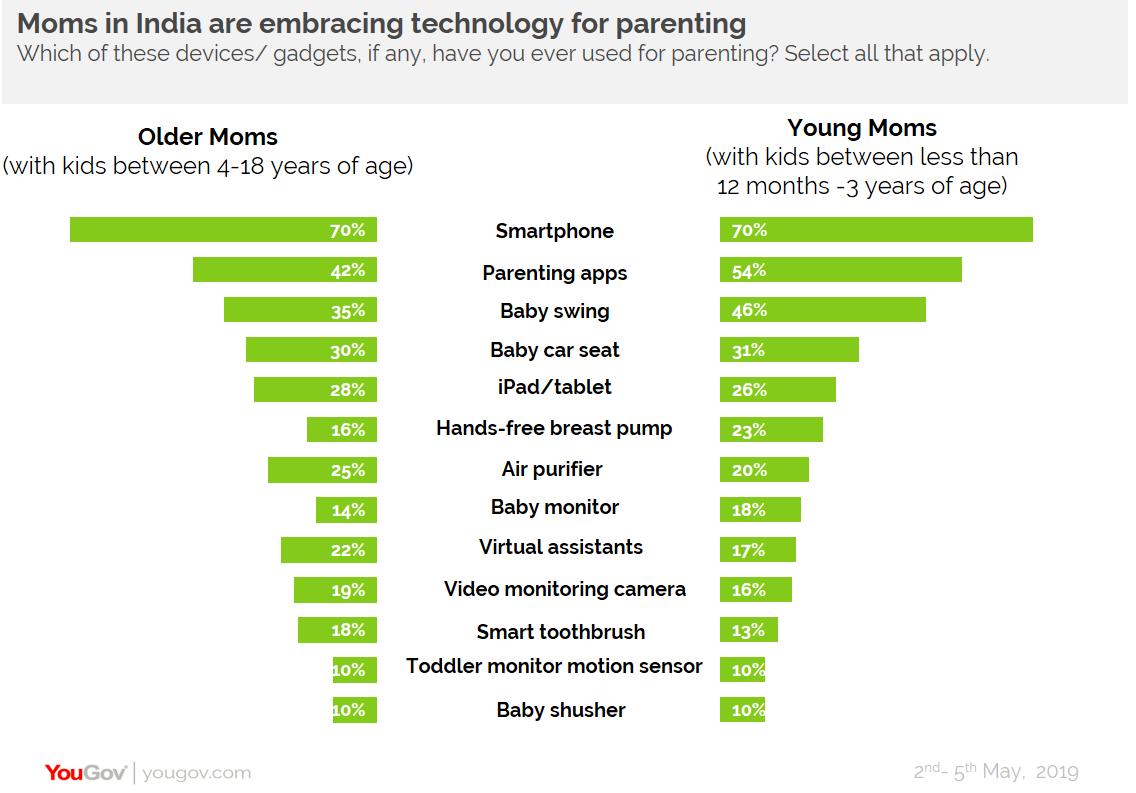 Parenting apps, on the other hand, are one of the most used and recommended products of technology used for parenting by mothers in India. The popularity of these apps is paramount amongst the young moms, with more than half (54%) of them saying they have used it and more than 2 in 5 (42%) wanting to use it or recommend it to others.

The survey shows that one of the most resourceful technological innovations for young moms is the hands-free breast pump, with just under a quarter saying they have used it (23%) while slightly above a quarter (26%) wanting to buy it in the future or recommend it to others.

It is interesting to note the growing popularity of virtual assistants (such as Alexa and Google Home), air purifiers or humidifiers and video monitoring cameras among Indian mothers. Compared to the young moms, a higher number of older mothers have used these devices in the past, however, both sets of mothers have expressed a desire to buy these devices in the future.

Even though mothers in India rely heavily on their family and offline support groups for parenting advise, as compared to older moms, a higher number of young mothers are likely to consult online blogs for related information (50% vs 41%).

Although technology plays an important role in the lives of these mothers, they fear certain aspects of it. When it comes to the biggest fear of parenting in a digital age, more than three-quarter mothers (76%) consider protecting their child from the online dangers (such as cyber security/ cyberbullying, etc.) a challenge. This fear is the strongest in the older mothers, especially mothers of teenagers (13+ years olds), with more than eight in ten (82%) saying this.

Child safety is the biggest concern for mothers today and they are taking various steps to create a safe online atmosphere for their children. Limiting everyday screen time (55%), blocking certain websites (54%) and having dialogues about safe online practices (50%) come out as the top steps that mothers have taken in this regard.

However, some safety mechanisms take more prominence depending on the age group of the child. While around half of young mothers (49%) set parental control on certain channels for safe interaction with technology, more than half of the old moms (53%) have had dialogues about safe online practices with their children. This is the topmost step taken by more than 3 in 5 (61%) mothers of teenagers to ensure a safe online experience for their child.

Data collected online by YouGov Omnibus among 770 mothers in India between 2nd and 5th May 2019 using YouGov’s panel of over 6 million people worldwide. Data is representative of the adult online population in the country.