On the occasion of World Environment Day, YouGov asked respondents what do they think about the air quality in their city and what measures are they taking in order to reduce pollution.

The research shows that the number of people finding air quality in their city toxic or unhealthy has reduced over the last six months. At present, a third (33%) think the quality of air in their city is unhealthy or toxic as opposed to 39% who said so in November 2018 when we first surveyed them on this topic.

Even though the perceptions of air toxicity have fallen to some extent, pollution continues to remain a problem in tier-1 cities. Historically, this problem has been the most severe in Delhi NCR as compared to other metros. In mid-November, Delhi’s air quality index had dropped to a dangerously low level, forcing the government to take remedial actions. The number of people claiming the quality of air in the city is toxic has considerably reduced in the last six months (81% in November to 62% now).

In Mumbai and Kolkata, perceptions about air quality remain pretty much the same, however, in Bangalore it has improved to some degree. Chennai is the only metro city where the air quality perception has dropped and a higher number of people feel the air is toxic or unhealthy (26% saying this in November vs 35% in May). 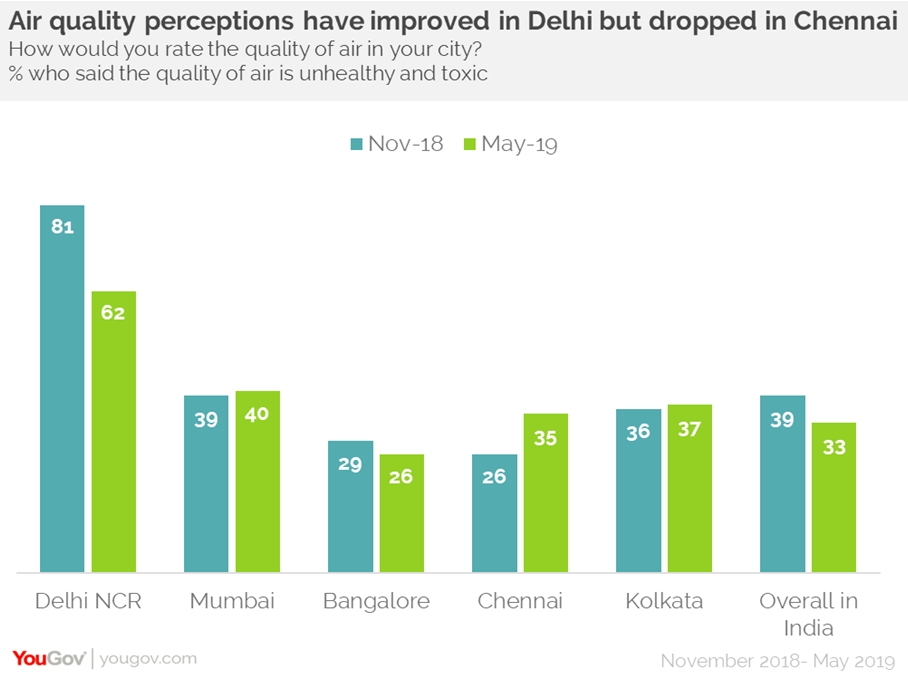 Even though a lesser number of people feel toxicity in the air, they are bearing the consequences of pollution. Irritation to eyes, nose or throat remains to be the most dominant effect of air pollution, but the impact seems to have gone down. Compared to November, a lesser number of people have said either they themselves or their family members have faced this issue due to air pollution (65% vs 59%). The same is true for other resultant issues such as skin allergies (52% vs 46%) and breathlessness (57% vs 38%).

Although most respondents (59%) think people should use environmentally safe products to reduce air pollution, only 38% do it personally. Currently, using public transport or carpool is the most followed measure by people to check pollution (with 42% saying they do it), followed by recycling or reusing products (41%), keeping indoor plants at home and office (39%) and conserving electricity (38%).

Although a third (33%) said people should invest in air pollution trackers or purifiers, it is the least followed practice and only 1 in 10 (11%) are actually doing it to control airborne pollutants at home.

Talking about air pollution, Deepa Bhatia, General Manager, YouGov India, said, “Last year, when Delhi’s air pollution surged to an emergency level, it was largely attributed to seasonal agents such as extremely cold air and fog. However, with the change in weather, the air quality perceptions also seem to have changed as a lesser number of people perceive it to be unhealthy now than they did in November last year. Even though we see a shift, pollution is never completely out of season and hence, these changes need to be regularly monitored before implementing action plans.”

Data collected online by YouGov India among around 1,000 respondents in India in two phases- November 2018 and May 2019, using YouGov’s panel of an online representation of India