Although there is an interest to find love, being able to love the person of their choice is still a challenge for many

A third of LGBTQ+ Indians said they are meeting people for dating or friendship digitally, either through dating apps like Tinder, OkCupid, etc. (with 18% saying this) or through community-specific dating and networking apps like Grindr (16%), new YouGov survey reveals.

While the world is celebrating PRIDE month, extending their support towards the LGBTQ community, YouGov India surveyed LGBTQ+ Indians to know how are they finding love after the monumental verdict decriminalizing section 377 in India last year.

The research shows that though the community is in the pursuit of love, they are battling the problem of loving, marrying or parenting a child with the person they love (with 31% saying this is an issue). However, the biggest issue for the community is that of securing equal rights and social acceptance (as said by 39% people), and this issue is the strongest in North India as compared to other regions of the country.

Despite these challenges, nearly half of LGBTQ+ people (48%) said the Indian society is progressing in terms of representing the LGBTQ community and upholding their rights. Two in five (39%) even admitted to noticing visible changes in attitudes and perceptions towards the community post decriminalization of section 377 last year. 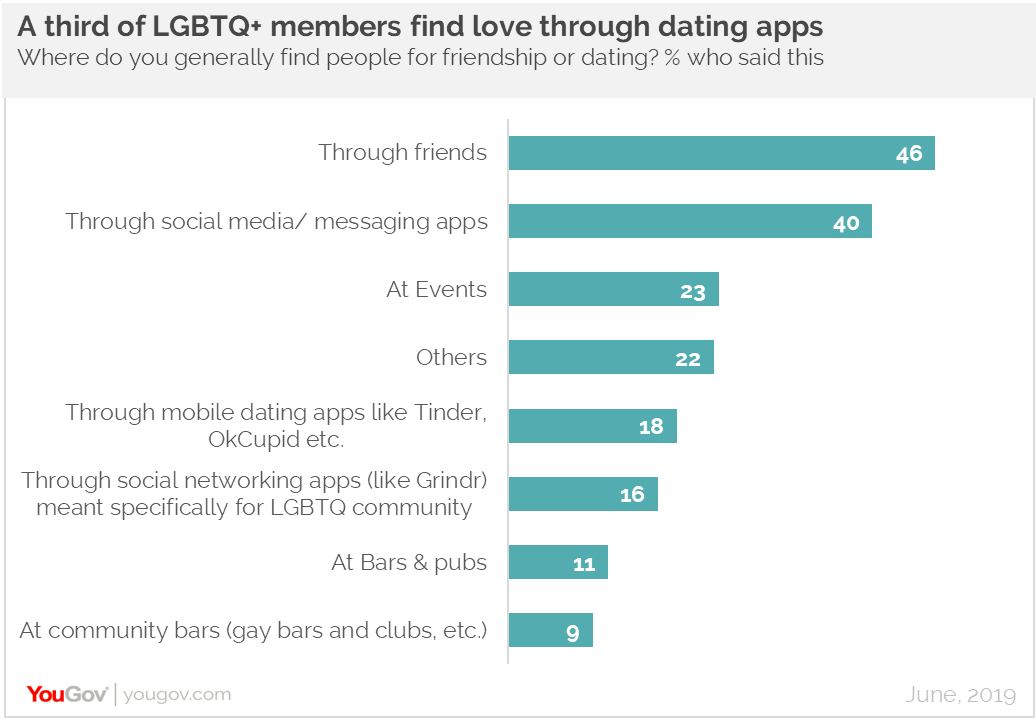 At present, close to half of these people (47%) admitted to being in a relationship and one in seven (14%) are looking out to be in one. Surprisingly, the married LGBTQ members are more likely to use dating apps than the single ones (40% vs 31%). In fact, the most active users of community-specific dating apps are married and identify as bisexuals, with a quarter of them (25%) saying they use these apps to meet people. GenX is also more likely to use these apps to connect with people as compared to the millennials (41% vs 32%).

Although friends emerge as the biggest source of matchmaking (with 46% saying that), the opportunities to seek companionship for the LGBTQ community has moved to different avenues.

Social media and messaging apps are a big help in this regard (40%). Outside the online world, social events (23%), bars & pubs (11%) and LGBTQ specific community bars (9%) are other places where LGBTQ+ members are networking. It is interesting to note that while LBGTQ members in tier 1 and 2 cities have more facilities to meet people through dating apps, a higher number of people in tier 3 cities are finding friends and love interests at events (with 32% saying that).

Speaking about this, Deepa Bhatia, General Manager, YouGov India, said, “Social networks and dating apps are great avenues for the LGBTQ+ community looking for love. These platforms provide acceptance and the option of anonymity, especially for the ones who have not come out of the closet yet. Recognising an opportunity and in an attempt to be more inclusive existing dating apps have added LGBT labels while some apps have been developed specifically for the community. However, these facilities are majorly available only in urban cities. Brands need to understand the challenges and requirements of the community in smaller cities and make these platforms accessible to them as well.”

Data collected online by YouGov Omnibus among around 300 LGBTQ+ respondents in India in June 2019 using YouGov’s panel of over 6 million people worldwide. Data is representative of the adult online population in the country.