The rankings reveal the most positively perceived brands in India

YouGov’s annual brand health rankings reveal that Google is the most positively perceived brand in India. The global search engine giant sits ahead of WhatsApp and YouTube, who are placed at second and third, respectively.

The rankings are based on the Index score from YouGov BrandIndex, which measures overall brand health. The score takes into account consumers’ perception of a brand’s overall quality, value, impression, reputation, satisfaction and whether consumers would recommend the brand to others. 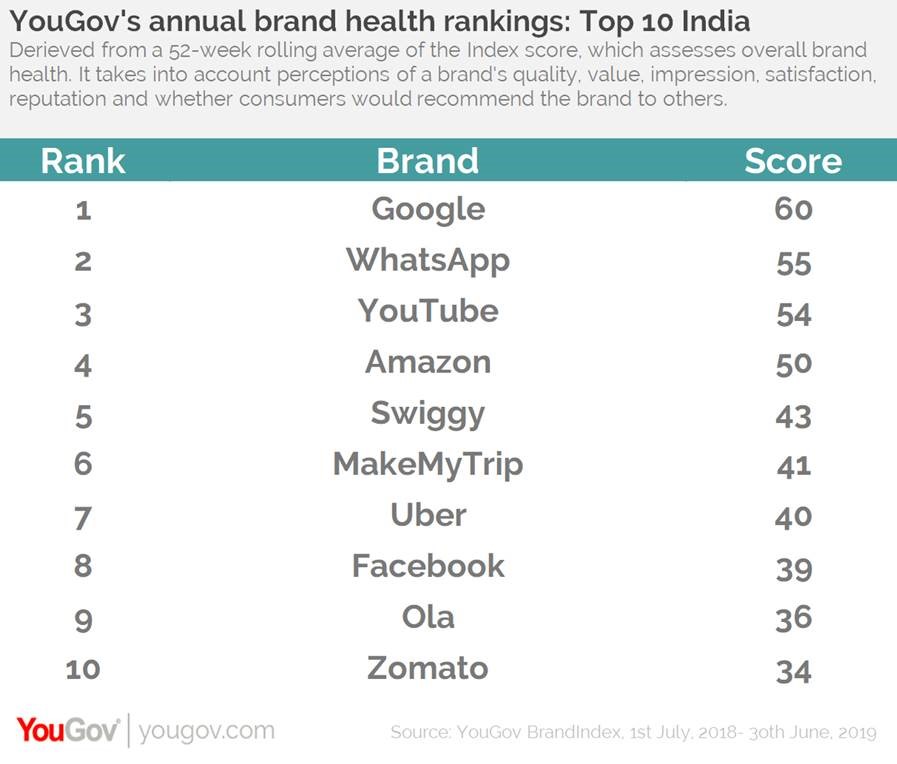 E-commerce giant Amazon lands at four and Uber is at seven, followed by Facebook at eight. The data shows that amidst these global giants, home-grown brands such as Swiggy and MakeMyTrip make an appearance in the list at fifth and sixth, respectively. Even Ola and Zomato appear in the list of top 10 brands, at ninth and tenth, respectively.

YouGov also revealed the brands that have made the greatest improvement to their Index score over the past 12 months. Uber EATS is the most improved brand of 2019, with a change in score of +12, moving from 6 in 2018 to 18 in 2019. 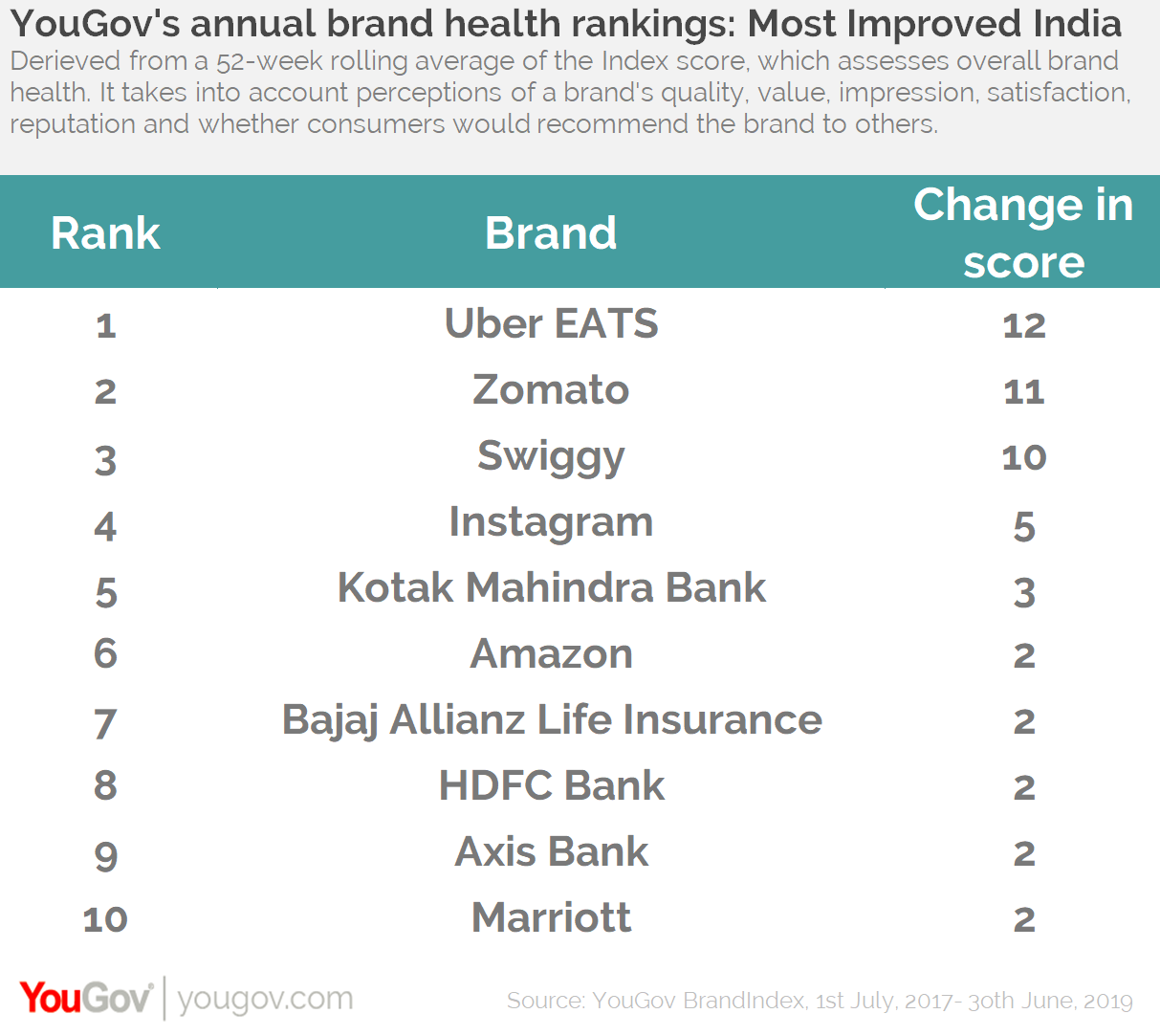 Last year saw Zomato grab a lot of headline for a lot of reasons. These movements have helped the brand strengthen its perception among consumers. On top of making it to the list of top 10 bands, Zomato has recorded a great improvement of +11 to its score in the past 12 months and has become the second-best improver 2019.

Swiggy and Instagram the third and fourth most improved brands. The list of improvers sees a dominance of financial brands such as Kotak Mahindra Bank (3), Bajaj Allianz Life Insurance (2), HDFC Bank (2) and Axis Bank (2).

YouGov also released the global annual brand health rankings for 2019. The global rankings reveal that eight of the top ten healthiest brands in the world are considered tech companies.

Google once again takes the top spot in our yearly ranking, followed by WhatsApp, YouTube, Samsung, and Facebook. 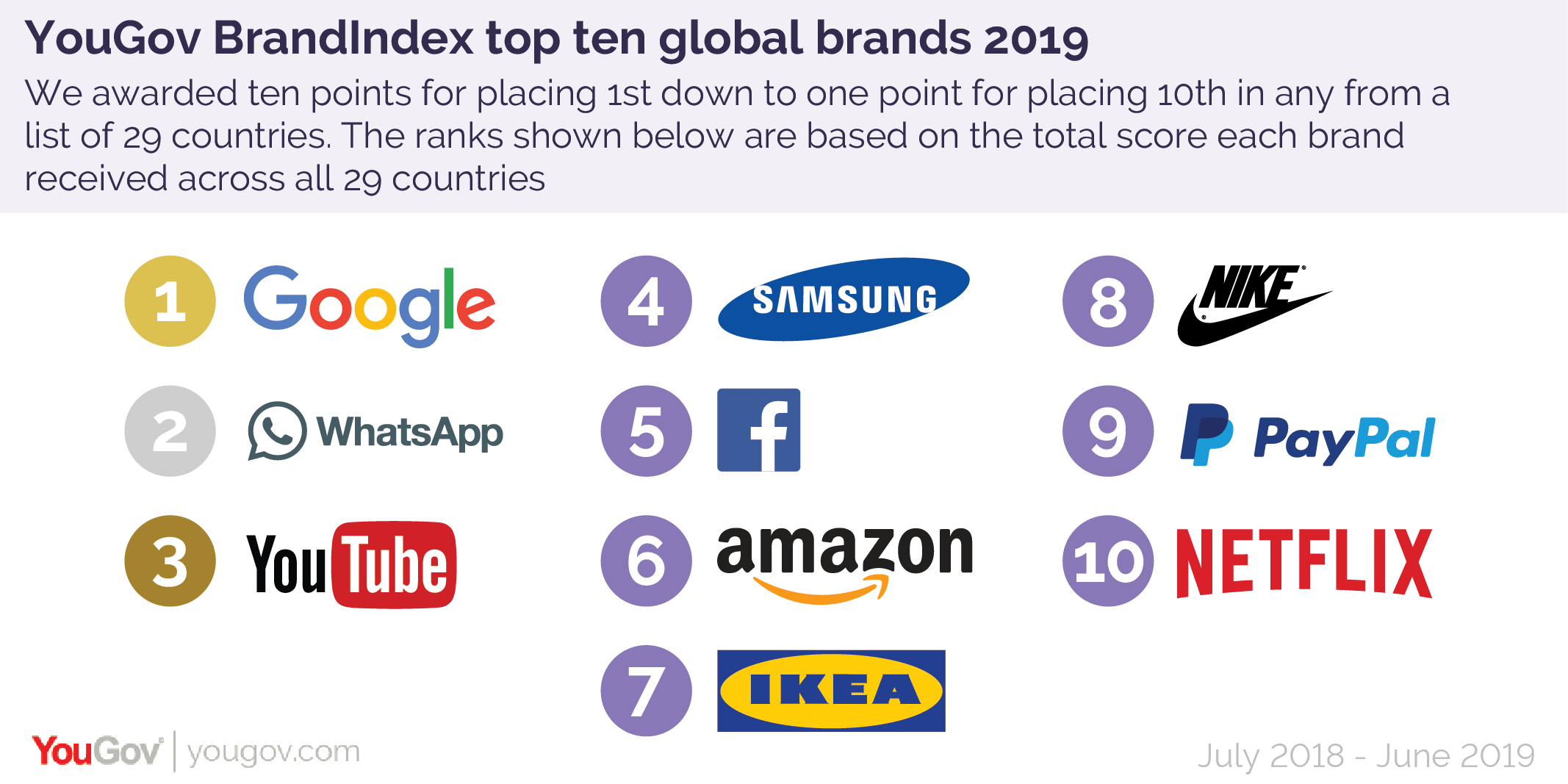 In fact, the only non-tech brands to crack the top 10 in the annual ranking are Nike, the US shoe company that caused a stir with its advertising campaign in 2018, and IKEA, which remains strong just like last year.

For this year’s list, YouGov used data from 29 countries – data from markets that cover three sectors or fewer were not counted in the global top 10.

The 250 brands in YouGov BrandIndex were ranked based on the Index score, which is a measure of overall brand health calculated by taking the average of Impression, Quality, Value, Satisfaction, Recommend, and Reputation.

All Index scores listed have been rounded to a single decimal place; however, we have used additional precision to assign ranks.