Overall, environment is a big concern for Delhi residents and is going to affect their voting intent

More than eight in ten (84%) residents of Delhi said the current pollution problem in the city is likely to influence their decision to vote in the 2020 Delhi Legislative Assembly Elections.

Millennials (87%) and GenZ (83%) are more likely to say this as compared to GenX respondents (79%). Furthermore, when it comes to solving the air pollution problem, majority (61%) said both the Central and State government should be responsible for this, one in six (16%) said the center should look into this and almost as many (13%) feel it’s the state government’s concern.

Along with pollution, problems like foaming of Ganga are also important to residents and environmental concerns altogether came on top when we asked people about the issues that will be considered important when deciding to vote in the upcoming state elections. 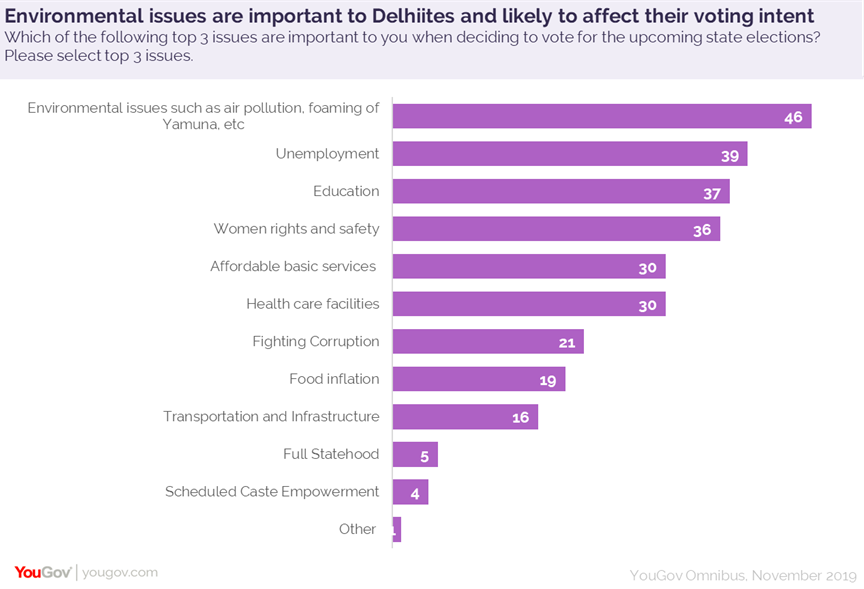 After the environment, unemployment (40% saying this), education (37%) and women's rights and safety (36%) are other issues relevant to people. While education is in the top three issues for everyone, the GenZ respondents seem to consider it more important than the other age groups (47% GenZ vs 36% millennials and 33% GenX). On the other hand, affordable basic services are more important to GenX (39%) respondents as compared to GenZ (21%) and millennials (28%).

When asked about the political party that they trust the most to address these issues, the Bharatiya Janta Party (BJP) came out as the one that Delhi residents trusted to solve most of the listed issues. It is especially trusted more for national issues such as unemployment, fighting corruption and inflation. When it came to state-level matters like affordable basic services, education, and healthcare facilities, Aam Aadmi Party was ahead of BJP in winning people’s trust. 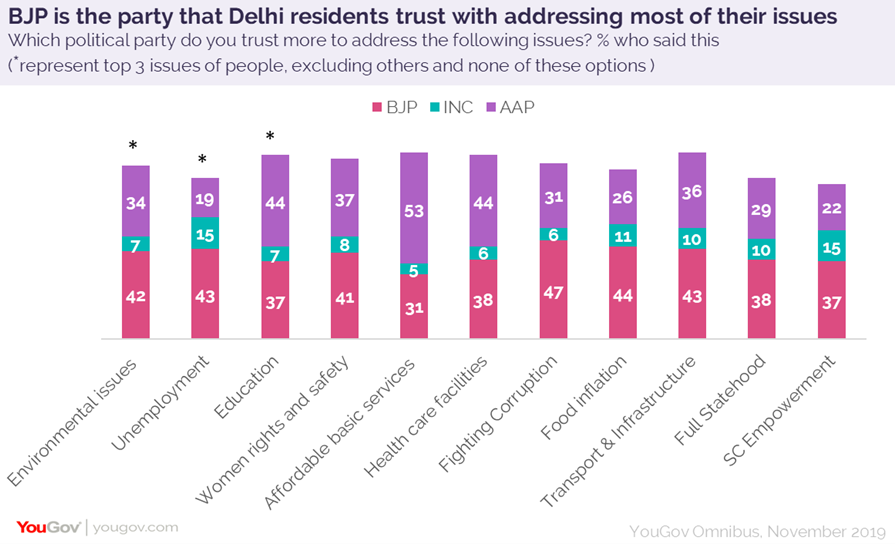 Interestingly, we see a generational gap in terms of trust when it comes to resolving the most important issues affecting people’s lives. The younger generation (GenZ) seems to be more trusting of AAP to resolve most of their issues. While millennials and GenX respondents have more faith in BJP for handling their problems.

Data collected online by YouGov Omnibus among around 750 respondents in Delhi in November 2019 using YouGov’s panel of over 6 million people worldwide. Data is representative of the adult online population in the state