Google has yet again been crowned as the brand with the most positive buzz amongst Indian consumers, with a buzz score of +54.3 points. WhatsApp and YouTube retain their positions- as second and third, with a score of +54.0 and +51.8 points, respectively. 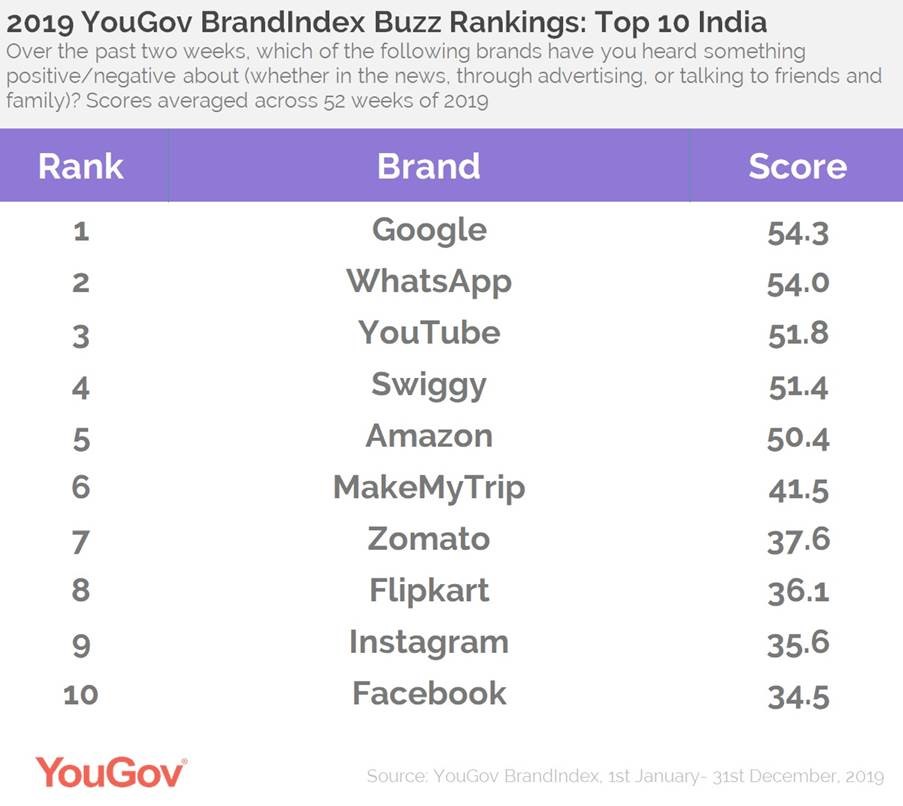 YouGov’s BrandIndex measures the public’s perception of brands on a daily basis across a range of metrics. The annual Buzz rankings are compiled using Buzz scores from the entire years’ worth of data. Buzz scores measure whether people have heard anything positive or negative about a brand during the previous two weeks.

According to the rankings, we see a surge in the popularity of digital brands and social networks. The list of top 10 is dominated by technology-backed internet brands.

In 2019, the food-delivery industry witnessed a lot of developments. Amidst diversification and discount wars, Swiggy managed to create a lot of positive buzz and moved up two positions, from sixth to fourth. Swiggy’s competitor- Zomato also noted improvement and entered the list at seventh.

E-commerce giant Amazon remains in fifth this year as well while its local competitor Flipkart landed at eight in the 2019 list.

The past year was not a promising one for travel booking site- MakeMyTrip. Following some headlining controversies this year, the brand’s buzz score has declined and it has moved down the list- from fourth to sixth. Social networks like Instagram and Facebook are placed in nine and ten, respectively, in the 2019 list.

YouGov BrandIndex has also revealed which brands noted the most improvement in their Buzz score in 2019. Uber Eats is the “most improved” brand of the past year in India, with a rise of +12.0 points to its Buzz score, going from +12.9 last year to +24.9 this year. Swiggy and Punjab National Bank come in next as the second and third most improved brands, with a change in score of +8.3 and +6.8, respectively. 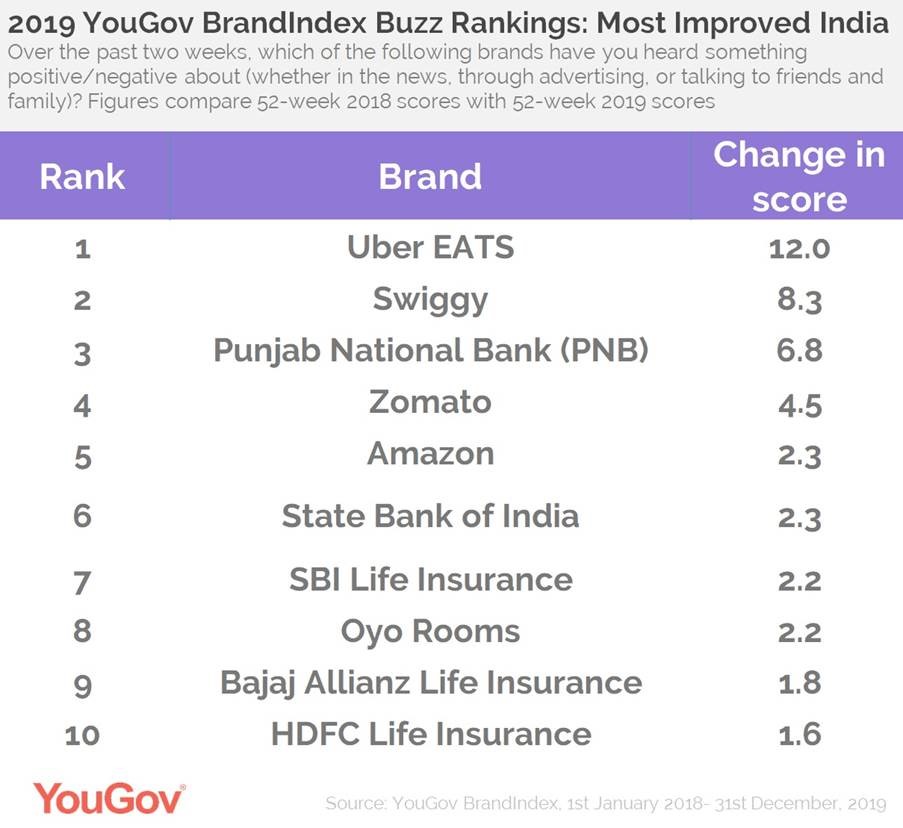 Finance brands seem to be resonating well with consumers. Apart from PNB, four out of the top ten brands belong to this category, namely - the State Bank of India (2.3), SBI Life insurance (2.2), Bajaj Allianz life Insurance (1.8) and HDFC Life insurance (1.6).

Other Internet brands, such as Zomato (4.5), Amazon (2.3) and Oyo Rooms (2.2) have also recorded good improvement in their Buzz scores over the past year, making it to the top 10 improvers list of 2019.

The 260 brands in YouGov BrandIndex were ranked using the Buzz score which asks respondents, “If you've heard anything about the brand in the last two weeks, through advertising, news or word of mouth, was it positive or negative?” Scores are net scores, calculated by subtracting the percentage of negative responses from the percentage of positive responses for each brand.

All Buzz scores listed have been rounded to a single decimal place; however, we have used additional precision to assign ranks.