Not only have people increased their digital content viewing time in the past year, but some have also unsubscribed their DTH connections and moved completely online for content

As the New Tariff Order 2.0 proposed by the Telecom Regulatory Authority of India (TRAI) is likely to come into effect starting March 1, 2020, YouGov ran a survey to understand the impact of the original order on the content consumption habits of Indian consumers.

As per the earlier order, users were to choose channels they liked and pay standardised rates for only those. Although this move was meant to enhance the customer’s television viewing experience, people did not seem too happy with its execution.

According to the research done by YouGov in 2019, when the order was first passed, half of the 1020 surveyed respondents (49%) indicated their likeliness to spend more time online watching original content as a result of this amendment. 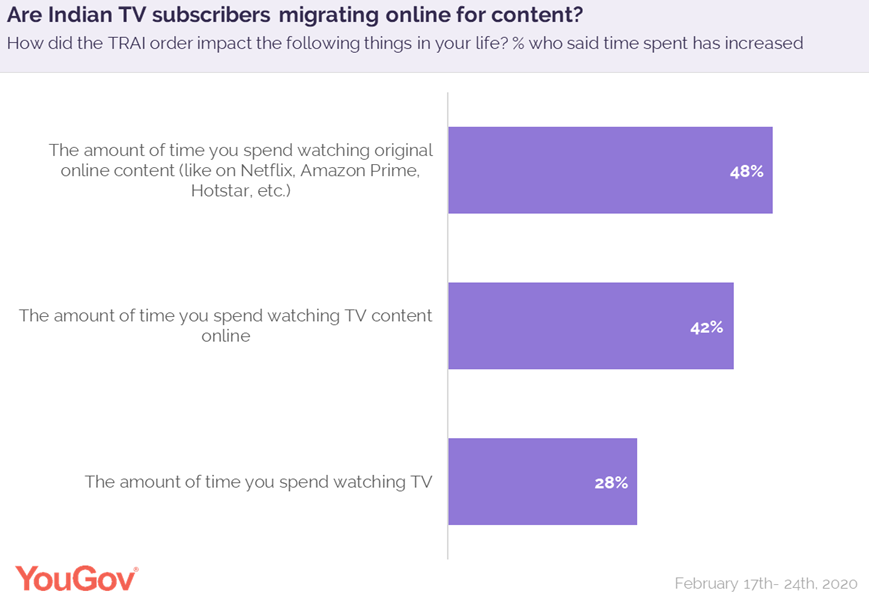 One year later, the 2020 research findings show that this is exactly what has happened and people seem to have migrated online for content. Around half of Indian DTH subscribers (48%) said the amount of time they spend watching original online content (on Netflix, Amazon Prime, Hotstar, etc.) has increased after the implementation of the TRAI tariff order last year. Almost as many (42%) said the same for time spent watching television content digitally.

On the contrary, the TRAI guidelines seem to have adversely impacted the business of television and 43% said their TV-viewing time has decreased in the last year.

The New Tariff Order 2.0 is likely to make subscriptions affordable by offering consumers 200 channels with the base slab of INR 130 as opposed to 100 channels offered earlier. The data shows that the majority of respondents (60%) favour the revised order, 14% disapprove of it and 26% have no view in this regard.

Support could be due to the fact that people positively perceive this change and more than half (56%) feel it will empower them to choose the channels they like. Although people largely support it, many (36%) feel the new amendment will confuse consumers by giving them too many options to choose from.

Following the introduction of the TRAI regulatory framework last year, 40% TV-viewers selected channels individually and paid for each, 37% bought a bundle pack and 23% opted for free-to-air channels with few additions.

If the new TRAI rule comes into force, most people (38%) are still likely to individually select channels. The proportion of people wanting to buy a bundle pack as well as keep free channels is similar, at 31% each, suggesting that people are equally receptive to each of the offerings.

Commenting on this, Deepa Bhatia, General Manager, YouGov India said,  “YouGov’s survey last year rightly predicted the likely impact of the new regulation on consumer viewership. The latest findings validate this prediction. The new order is likely to disrupt the business further and hence it is even more important for advertisers to study the changing consumer needs and behaviour and reallocate their media budgets accordingly.”

Data collected online by YouGov Omnibus among around 1000 respondents in India between February 17th -24th, 2020 using YouGov’s panel of over 8 million people worldwide. Data is representative of the adult online population in the country