Despite the gender divide among internet users in India, women are as dependent as men on the internet for their diverse needs

YouGov India’s latest survey reveals that although Internet penetration in India is dominated by male users, usage is high even among the urban female users and their dependence on the digital medium is as much as their male counterparts’.

Nearly two in five Indian women (37%) said they cannot function without the Internet for more than a few hours, and 30% cannot do without it beyond an hour. Furthermore, 23% cannot be without using it for more than a day and for 10% beyond a week is a stretch.

These numbers are similar to that of male users, where 39% of males said they cannot function without the internet for more than a few hours, and 27% cannot go beyond an hour.

Looking deeper into the internet habits of urban women, we see that unsurprisingly the majority of women use the internet for online shopping and for accessing social media (72% each). After that, it is used for emails (65%) and online chatting (61%).

Apart from the traditional use, many women are using the internet for varied services such as streaming videos (58%), watching news (58%), streaming music (57%) and online banking (57%). In fact, a higher number of women use the internet for listening to music as compared to men (57% vs 49%).

Notably, even for activities that are popularly associated with men, indulgence by women is fairly high. Two in five women (39%) spend time on the internet for gaming and one in eight (12%) use it for the purpose of online dating.

Although it appears that most women have a positive perception of the World Wide Web, there are many who have concerns around the time spent online. 36% women said they spend more time online than offline, and just as many said they lose track of time when they’re online (35%).

In general, females belonging to Generation X have a more favourable view of the internet than their younger counterparts. A higher number of GenX respondents (73%) are likely to say the Internet has made their lives easier as compared to millennials (57%) and GenZ females (47%). On the contrary, GenZ and more likely to say they lose track of time when surfing the internet as compared to GenX females (44% vs 28%). 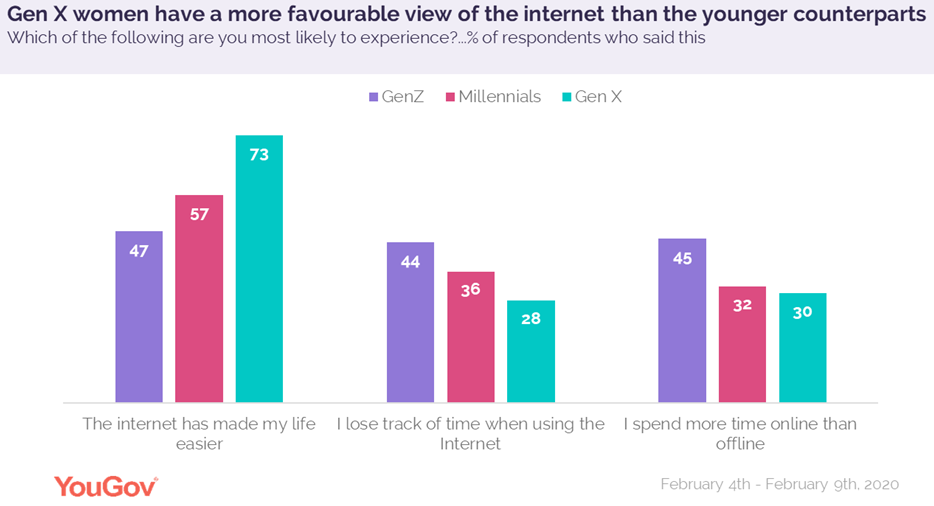 In order to keep a check on their internet usage, more than half of women (52%) make conscious efforts to stay away from the internet when they are around people. Two in five refrain from using it at bed-time (42%) or turn off app notifications to avoid distractions (40%). A third take up a hobby or activity to reduce their digital time (34%) or track their internet usage and limit their online time (33%).

Commenting on this, Deepa Bhatia, General Manager, YouGov India, said, “Despite the high disparity between internet users in India, the data shows that the active women users are indeed spending as much time as men using the internet. Their dependence on the digital medium for multiple needs and the overall favourable view of the internet presents a great opportunity for technology brands to indulge them in areas of interest and tap into this growing segment of digital consumers.”

Data collected online by YouGov Omnibus among around 1014 respondents in India between February 4th -9th, 2020 using YouGov’s panel of over 8 million people worldwide. Data is representative of the adult online population in the country