Nearly half believe the situation will resolve in India in the next three months, but some think it may take longer

Yougov’s latest data reveals that even though some countries have managed to control the spread of Coronavirus with no new cases in the last few days, Indians are more likely to believe the COVID crisis will get resolved sooner in India than it will globally. Nearly half (48%) think the pandemic is likely to end in India within the next three months (end of May- end of July), which is higher than the number of people hoping for the same to happen globally within this time frame (40%).

Fewer Indians (32%) think it may take longer (end of August- end of October) till the crisis resolves in India, but the number of people saying this for the situation changing globally is slightly higher- at 36%.

Fewer than this, both locally (7%) and globally (10%) think the pandemic may last till the end of the year (end of Nov- end of Dec) till it is under control.

When asked about returning back to normal life, people seem more likely to return to public places such as such as parks and gardens, college and universities, malls and cinema halls (27% each), and restaurants and hotels (25%) once the number of COVID positive cases in the country are under control (27% each). Three in ten (31%) would consider visiting their friends and family at their homes under similar circumstances.

23% are willing to take a domestic holiday or a staycation when there is no further spike in cases, but when it comes to travelling internationally, Indians are more likely to do so either when the spread of new cases in controlled globally (21% saying this) or when a vaccine to prevent COVID-19 is widely available (20%).

On the other hand, Indians are more likely to return back to their offices or workplace once the government removes restriction on movement (with 29% saying this). A fifth are willing to do so when businesses open again.

While the Coronavirus is one of the greatest health crisis faced by mankind, it has changed the world for better in some areas. The biggest positive impact of the virus is believed to be on the environment, with 68% respondents saying that. The virus has also taught us to value what we have and half (50%) think it has helped us appreciate our loved ones and the society. 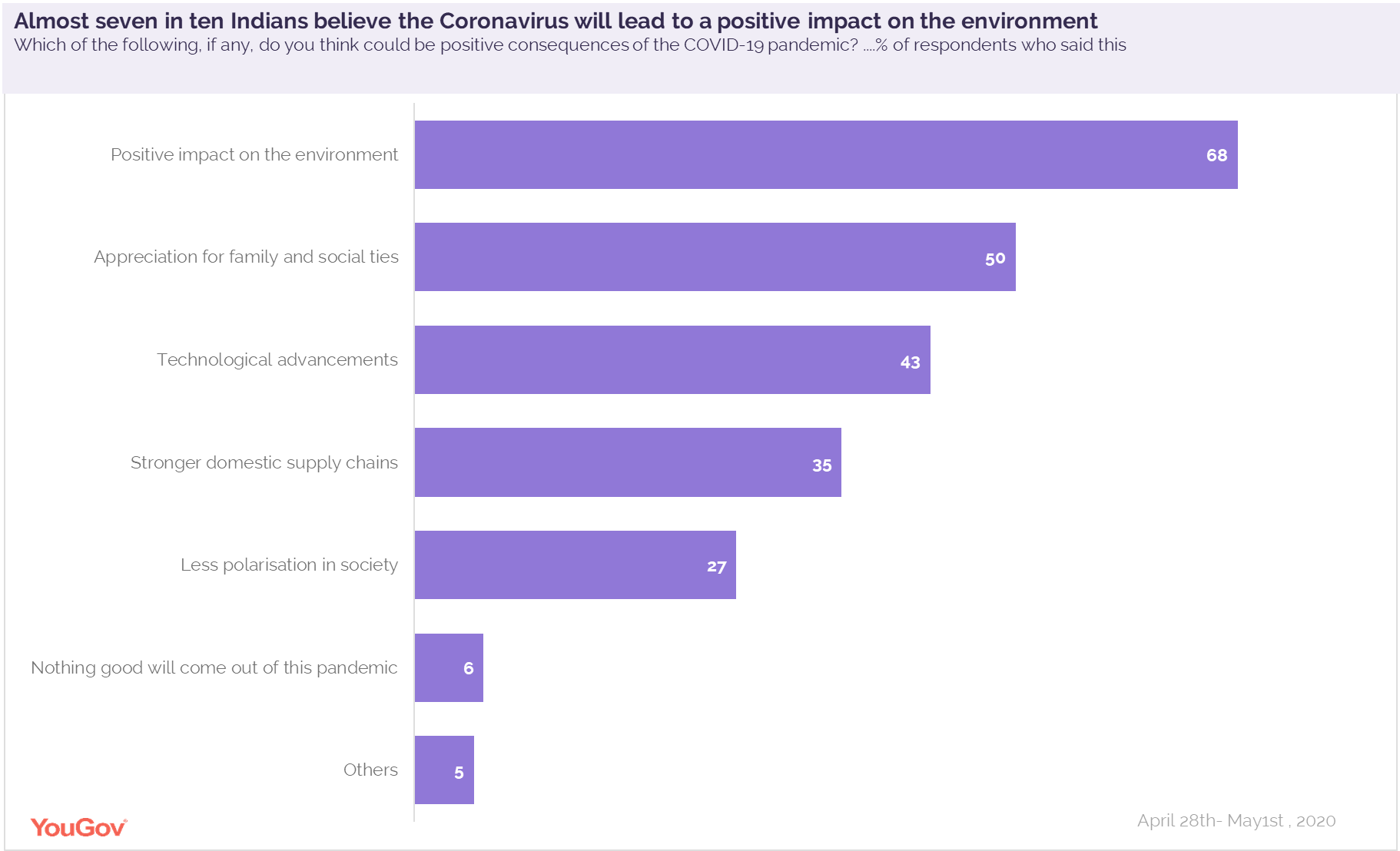 Many believe it may lead to technological advancements (43%), stronger domestic supply chain (35%) and less polarisation within the society (27%). A handful of people (6%), however, believe there will be nothing good coming out of this crisis.

Data collected online by YouGov Omnibus among 900 respondents in India between 28th April and 1st May 2020 using YouGov’s panel of over 6 million people worldwide. Data is representative of the adult online population in the country.