Although a majority are keen to get vaccinated, concern about the safety and efficacy of the vaccine is common among residents

As India prepares to roll out its first domestic Covid-19 vaccine, YouGov’s new survey reveals a large majority (68%) of urban Indians are likely to take the vaccination once it is available. A quarter (24%) are unsure of their decision and only 8% are unwilling to take the jab. 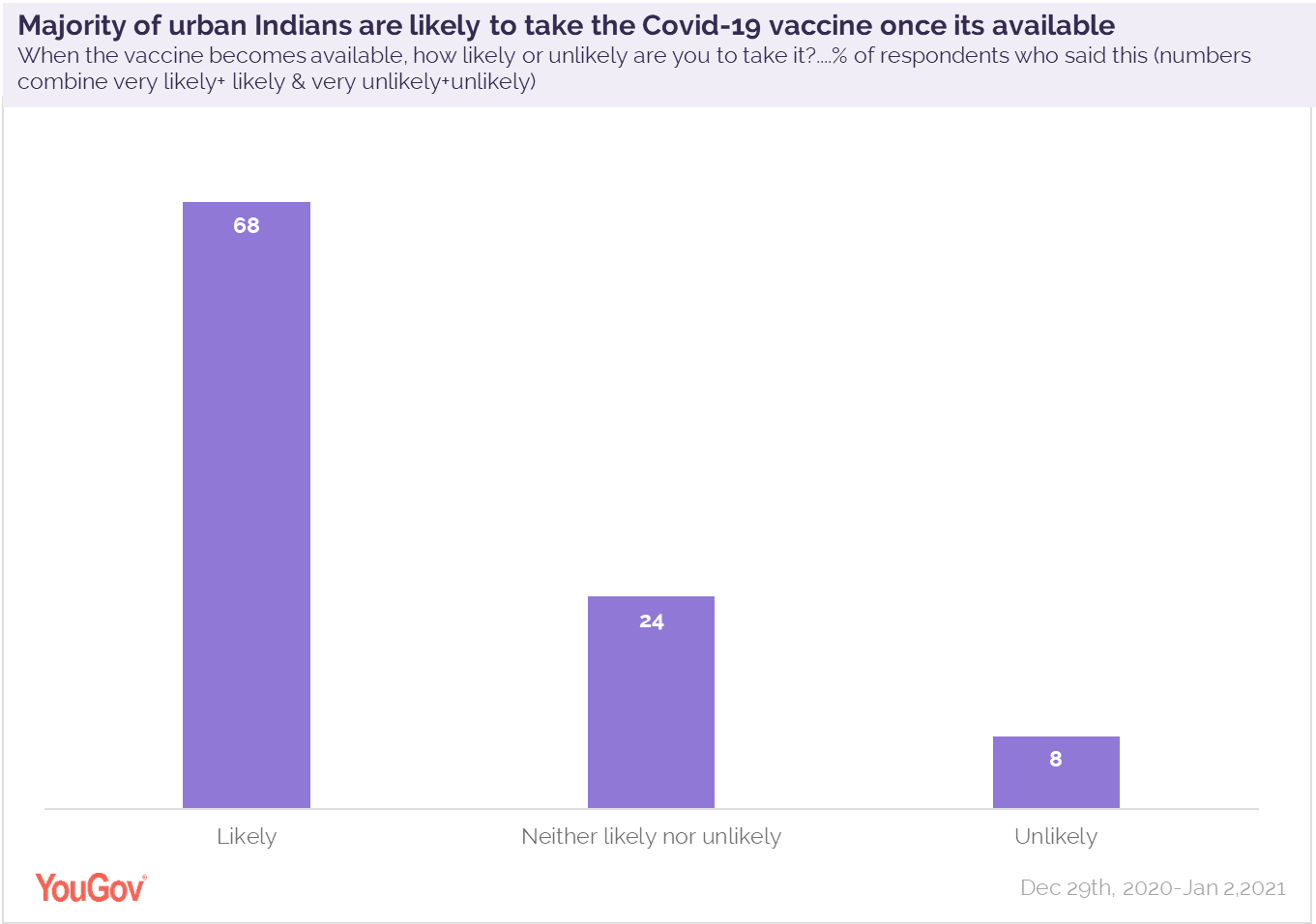 Of the people who said they are either unsure or unlikely to take the shot said they are hesitant about the safety of the vaccine and want to review it first.

Even among the ones willing to take the injection, safety concern reigns supreme and two in five (41%) said they will wait a few months before taking the shot. A third (33%), however, will get vaccinated as soon as the vaccine is available. A few would do so if vaccination is made compulsory by the government (13%) or by the employer/ educational institutes (11%). 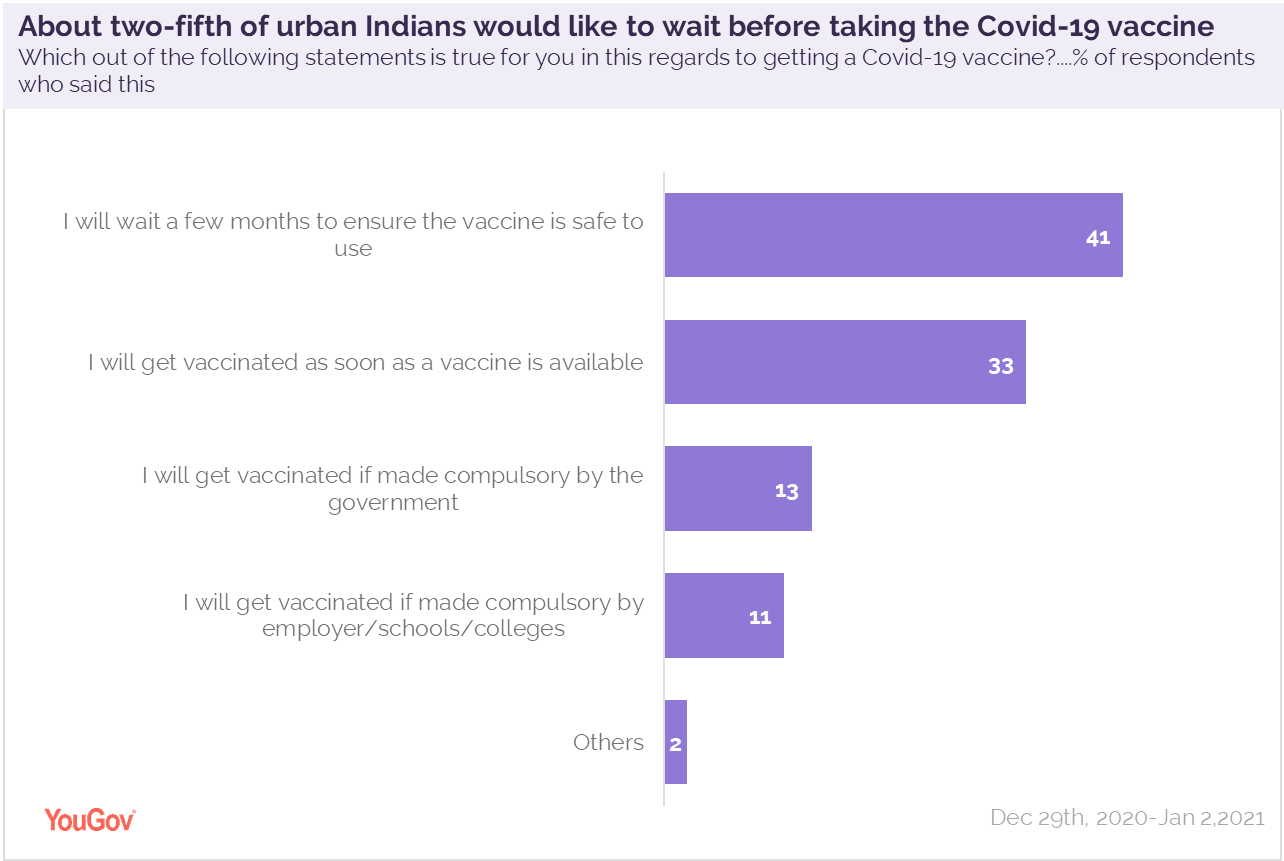 Although there is general hesitance towards the vaccine, the good news is more than half (55%) of the urban Indians said they trust the vaccine of Indian origin more than those from developed nations like US, UK and Russia, where only a few respondents (11%, 7% and 6%, respectively) displayed faith in the vaccine produced by these countries.

The Union Health Minister recently announced free first phase vaccination for the most prioritized beneficiaries in the country. This initiative aligns with the public sentiment where about half of the surveyed respondents (50%) said they would want the government to arrange free vaccines for everyone in the country. 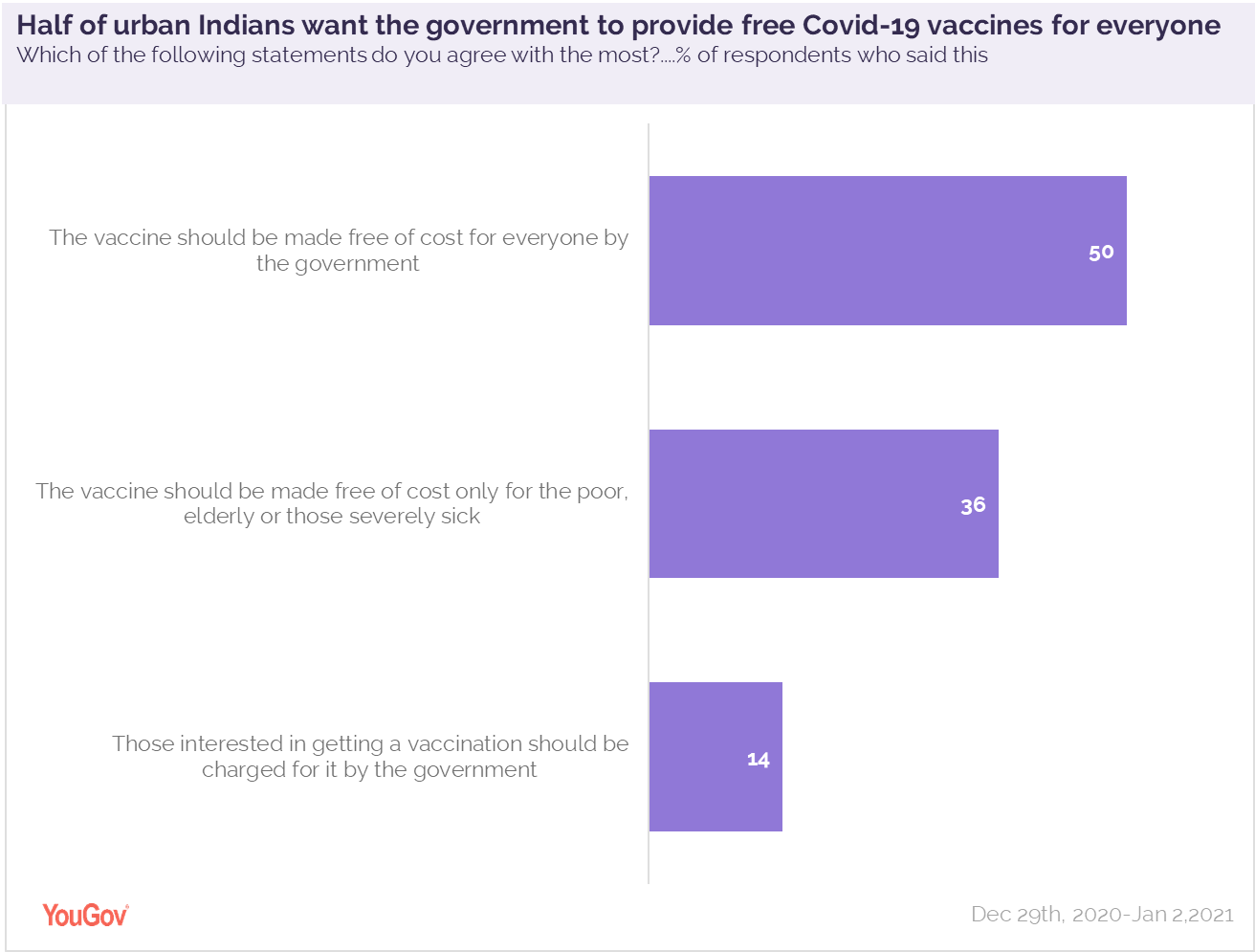 Many (36%) feel the vaccine should be freely distributed only to the poor, elderly or those who are severely sick, while a few (14%) think those interested in getting a vaccination should pay for it.

When asked about the order of priority, a vast majority feels patients suffering from high-risk diseases as well as senior citizens should be the top priority for vaccination. Apart from these, frontline workers and people in the service industry (79% each) are also rated high in the list of vaccine priority.

Public support for priority vaccinations of children and domestic helpers stands at a slightly lower percentage- 67% and 66% respectively, and preference for those below the age of 18 is lower- at 51%.

Apart from concerns around the safety of the vaccine, there seems to be a growing concern among residents about the new Covid strain that was discovered in the UK. When asked about the likely impact of this variant, more than half (53%) fear it may affect vaccine development and response.

YouGov Omnibus data collected online among around 1015 respondents in India between Dec 29th, 2020 and January 2nd, 2021 using YouGov’s panel of over 6 million people worldwide. Data is representative of the urban adult population in the country.