by
Bhawna Singh
in
Business & finance

Given the past year, it is unsurprising that a significant proportion of consumers in each market are saving money for unexpected hardships. This is highest in Indonesia – where our sample is representative of the online, rather than national population (54%) – Singapore (51%), and Spain (48%), but it amounts to comfortably more than a third of the public in every market except Denmark (20%). 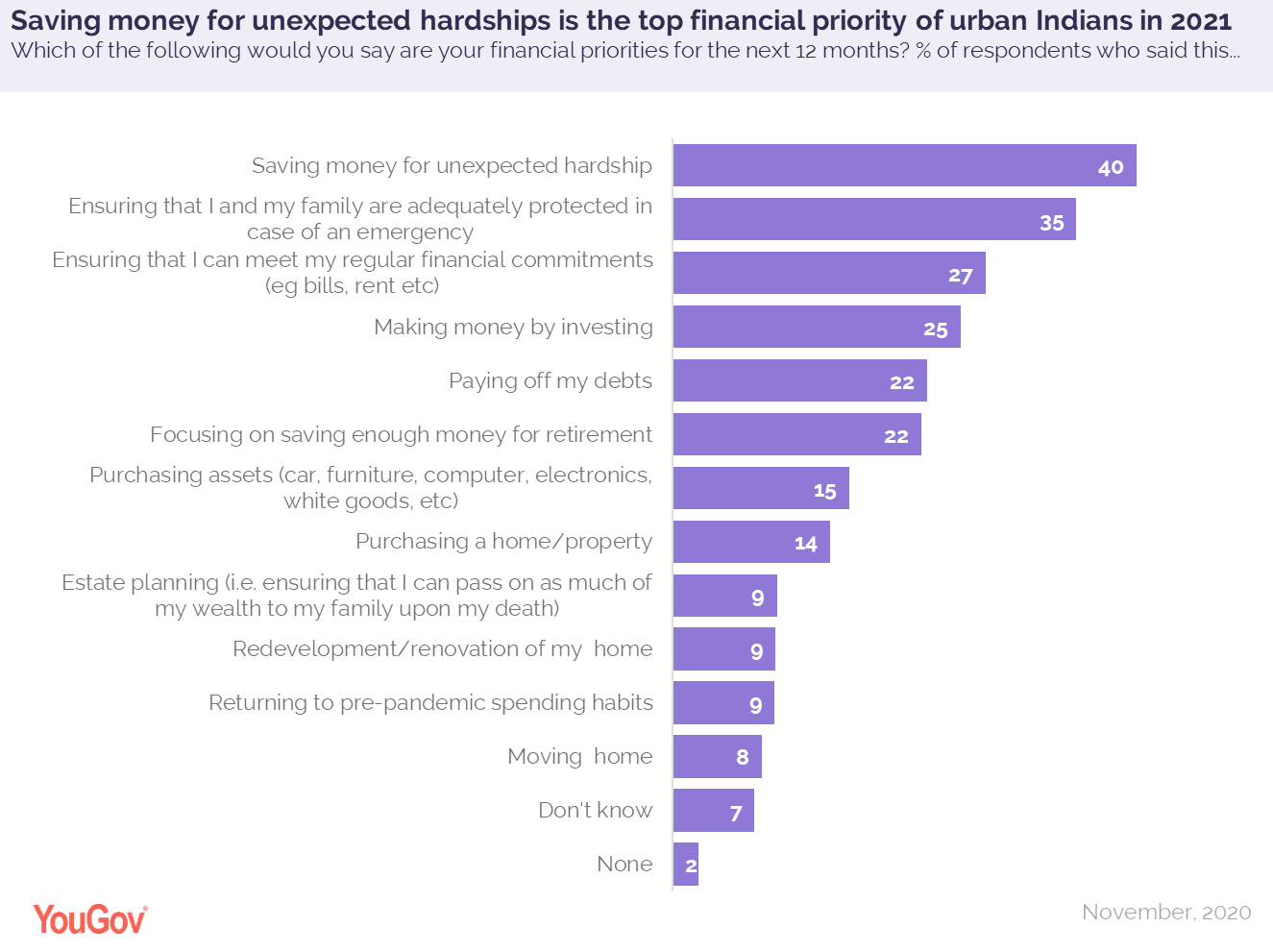 Apart from saving, a little over a third (35%) of urban Indians want to ensure they protect themselves and their families in case of emergencies while 27% look forward to fulfilling their regular financial commitments in the new year.

Apart from the bigger financial targets, investment is a big priority for Asian countries such as Indonesia and Hong Kong (37% and 38%, respectively), Singapore (29%) and China (28%).  In India, a quarter of urban Indians (25%) are likely to make money by investing it in 2021.

Buying a home is not a top priority in most of the surveyed markets, but in India one in seven (14%) plan to purchase a home or property this year. The importance of purchasing assets (such as car, furniture, etc.,) is also high in India (15%), along with China (18%) and Denmark (16%), as compared to the rest of the world.

Returning to pre-pandemic spending habits is more of a priority in many European nations but in India, less than one in ten (9%) consider it important, notably because saving seems to be the main goal this year.

When asked about their household situation in the last six months, almost half of urban Indians (49%) said they have been actively reducing non-essential expenses during this period.  Nearly a third have ‘saved more’ (32%) or ‘relied more on savings for expenses’ (31%). A fifth (21%) claim to have taken on more debt to cover expenses.

It seems people are likely to continue restricting non-essential spending in the future as well, with more than three-quarters of urban Indians (77%) saying that. In fact, in each of the APAC nations featured in our study, at least two-thirds of consumers plan to cut their costs going forward. 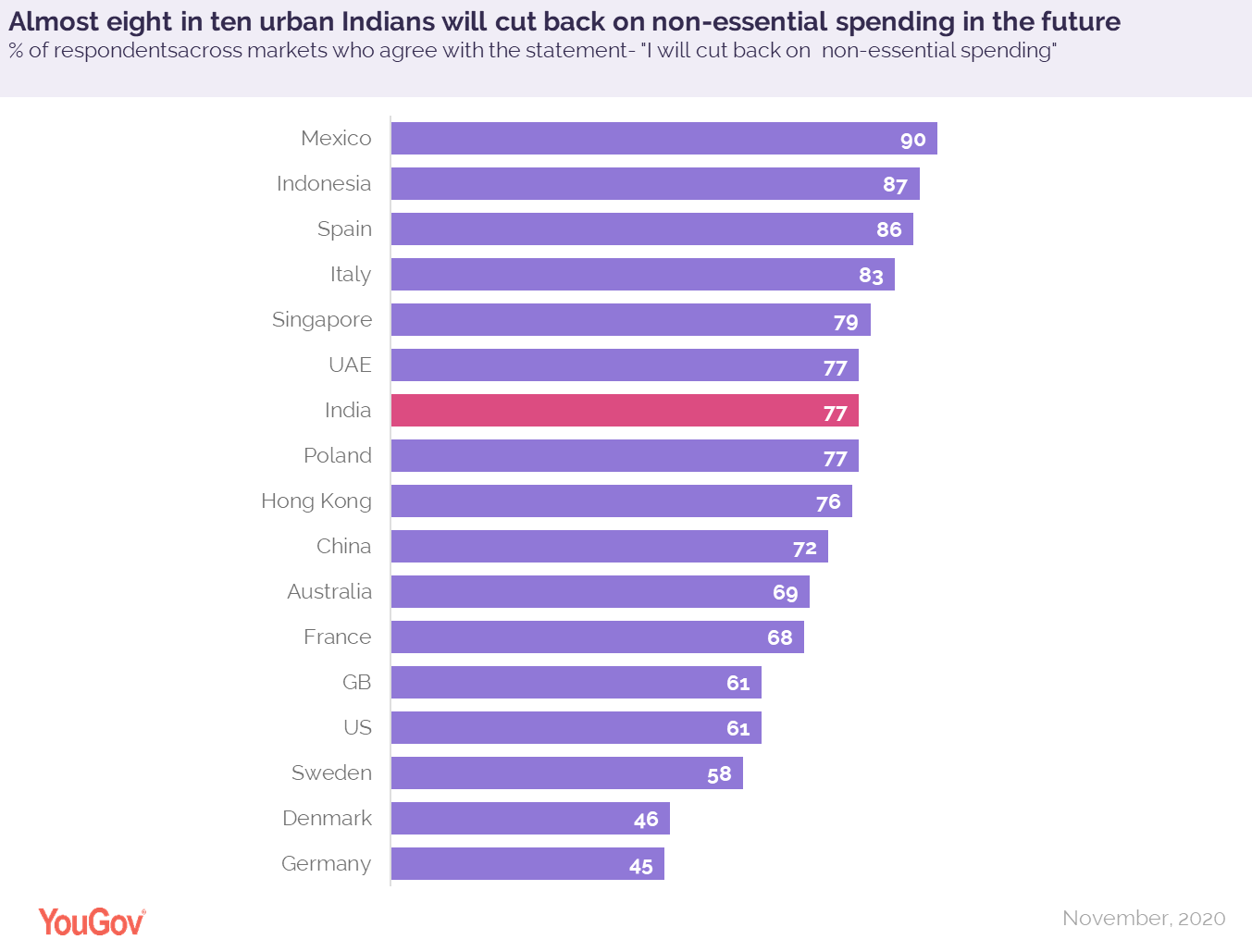 The paper also reveals public perspective towards cash and payment technology. India ranks among the top countries where people said they use contactless payment wherever possible (at 73%). Having said that, two in five (39%) prefer to pay by cash. The European nations in our study have largely accepted contactless payments– except for Germany, where cash appears to be a more prominent means of payment. However, usage of cash is the highest in Mexico, where more than half (52%) prefer to pay through this medium. 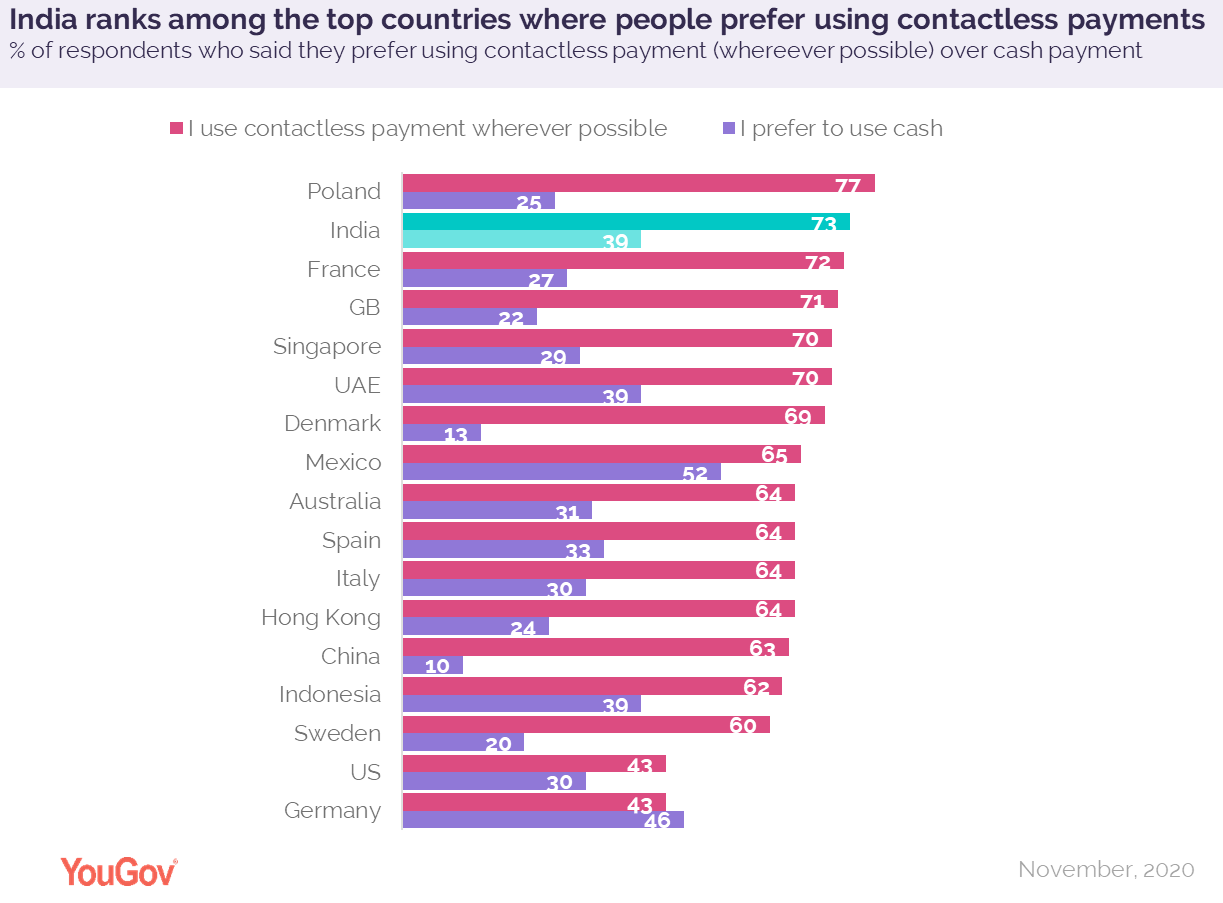 Commenting on this, Deepa Bhatia of YouGov, said, “The Coronavirus pandemic has disrupted people’s lives in many ways, including their personal financial situation. The data shows at present urban Indians’ financial priorities are focused around home and family. They appear to be more interested in saving for unforeseen hardships and less likely to revert to pre-pandemic spending habits or accumulate new debt obligations. As consumers are still dealing with the uncertainties of the pandemic, banks and financial service providers must come up with innovative offerings based on people’s current priorities and behaviours to make them feel more secure about their financial future.”