The report, titled ‘International Media Consumption Report 2021- Is there a new normal?’ provides an analysis of the global media landscape across 17 markets.

Across the globe, a plurality of consumers in the 17 markets favour the idea of watching advertisements in exchange for free content. Along with India, countries such as Mexico (65%), Spain (65%) and Poland (64%) highly favour this idea. 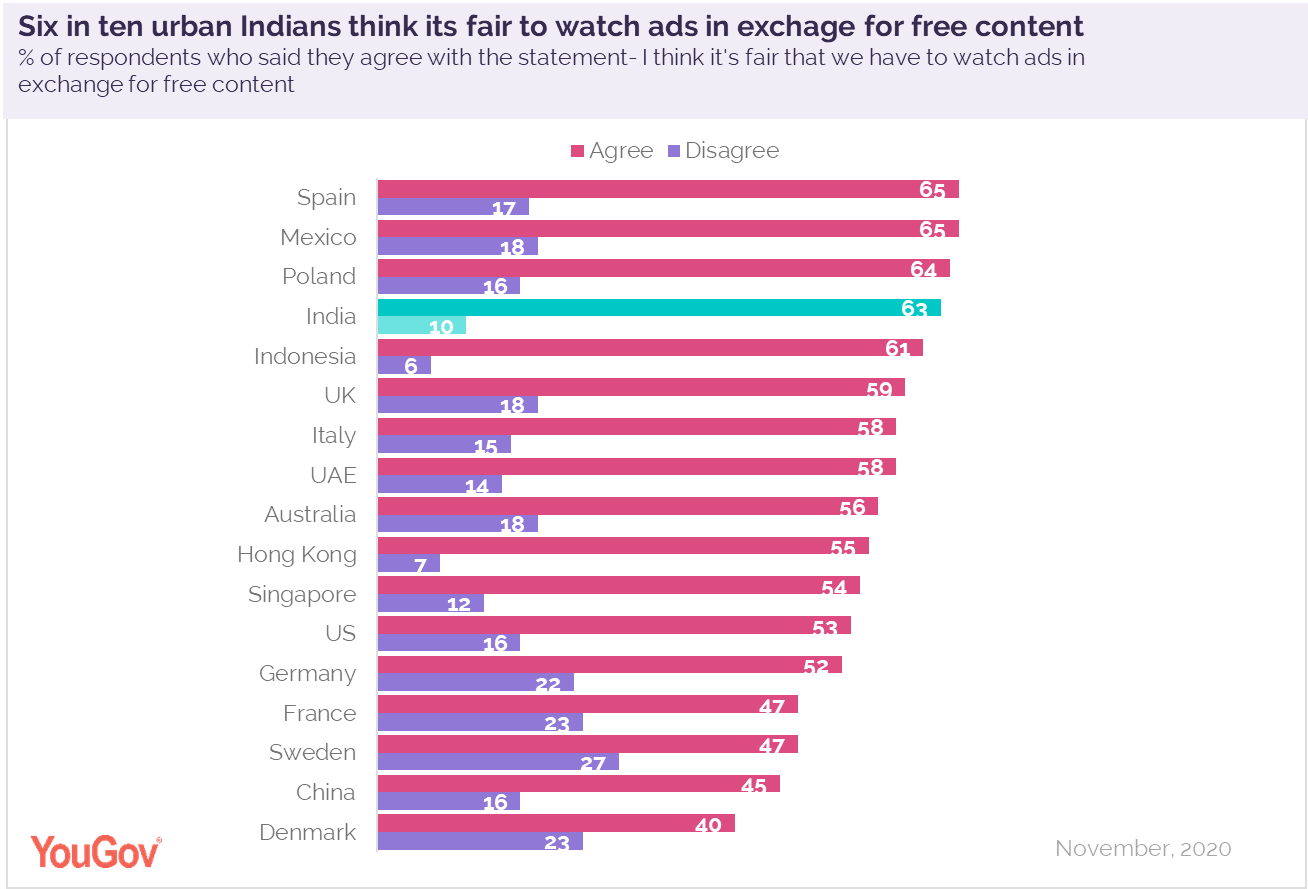 Support is comparatively lower in France (47%), Sweden (47%) and Denmark (40%), but even in these markets, only around a quarter consider watching advertising in exchange for free-content to be unfair.

For many people, COVID-19 meant spending more time at home. That translated into more time watching content - such as live TV, on-demand and streamed video. Across the globe, film and TV subscriptions such as Netflix, AppleTV+ or HBO Max are the most popular by some distance in every market featured in the study, in most, a majority of consumers have signed up to one of these services.

Music streaming services such as Spotify and digital, cable, or satellite TV subscriptions alternate between second and third place depending on the market. For all these international comparisons, it is worth bearing in mind that in some markets our sample is nationally representative, while in others it is online or urban representative.

In India, 55% of urban Indians are signed up to a film or TV subscription. Digital/ satellite TV services are the next most popular- at 41%, second highest in the world after Mexico. Music subscriptions rank third- with one in three (33%) subscribing to a paid version of a music streaming platform. 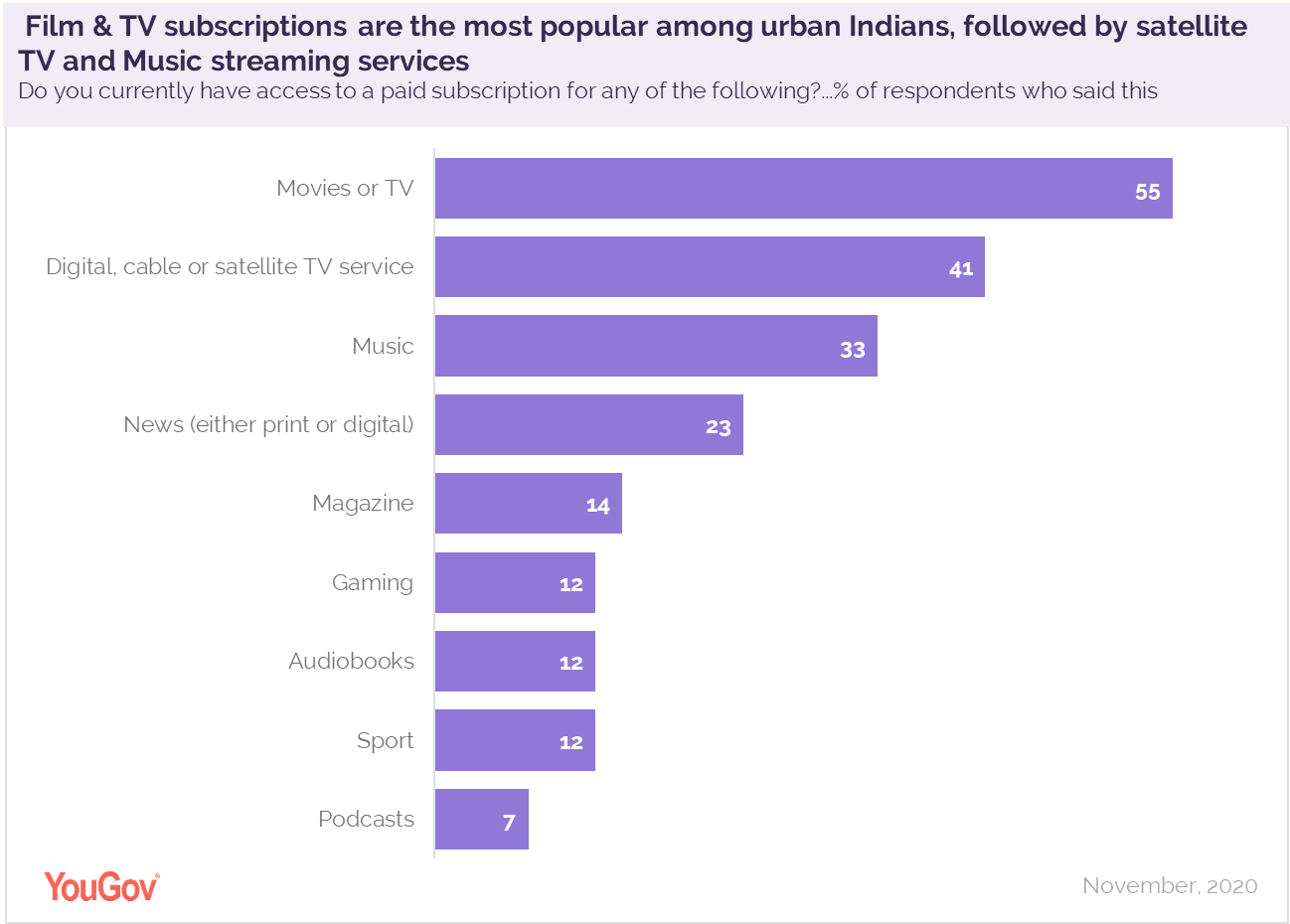 Our data shows that when global consumers were asked about the kinds of traditional media they have used in the past week, live TV came out on top. Across most of the 17 markets, over half of respondents consumed it – with the only exceptions being the UAE, Singapore, and China.

Print sits in the middle of the international pack and is particularly popular in India – where 46% of our nationally urban representative sample read a newspaper.

When asked about the digital media channels they used in the past week, a majority of respondents in most markets said they had used a search engine, logged on to social media, or seen video content online.

Large proportions also said they had communicated via messaging services, viewed content-streaming platforms, or watched live TV on their phone, tablet, or computer.

Urban Indians were the most likely among other markets to say they watched live TV on their phone, tablet or computer in the past week- at 57%. This trend is similar across age groups: majorities within most categories claim to have watched live TV in the last week, except for the 55+ group, where consumption is slightly lower - at 47%.

Consumption of online video content (59%) and social media (55%) was also high among urban Indians in the past week. 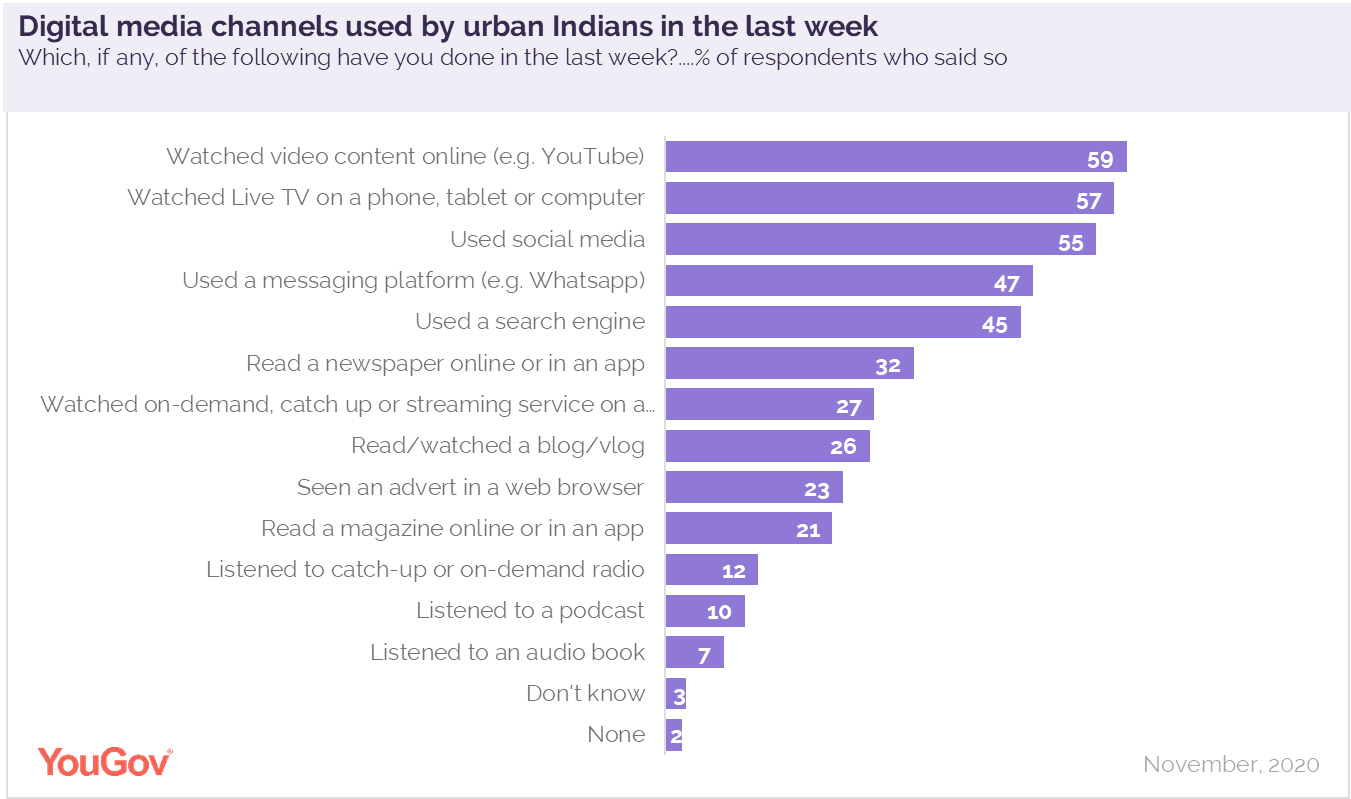 Consumption of radio, podcast and audiobooks was much lower and very few consumed these formats during that period.

Commenting on the report, Julian Newby, Sector Head of Media at YouGov, said: “Covid-19 has had a dramatic impact on consumer behaviour globally, and in turn, on media consumption habits. With a pandemic keeping more people indoors than ever before, digital media assumed greater importance as a means of keeping the public informed and entertained. Even then, certain traditional media formats remained popular among the masses. Our data shows that there are huge challenges for brands and advertisers looking to achieve ROI and effectively reach consumers in the right channels, at the right time, with the right message. Reliable, up-to-date insight can provide an early window into behaviour change to inform effective media planning and campaign development.”