The rankings were based on the Index score from YouGov BrandIndex, which is a measure of overall brand health calculated by taking the average of Impression, Quality, Value, Satisfaction, Recommend and Reputation. 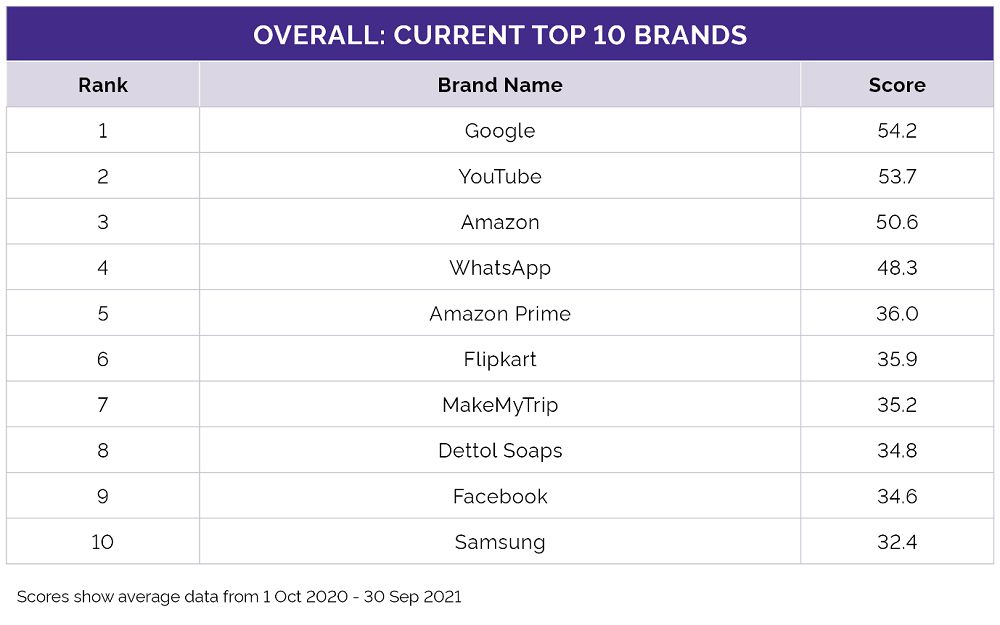 Google is followed by its subsidiary brand- YouTube which remains in second (53.7) this year as well, with a marginal improvement (of +0.4) in its year-on-year brand health score.

Both WhatsApp and its parent brand Facebook recorded a decline to their scores over the past year, moving down one place and three places to fourth (48.3) and ninth (34.6), respectively.

Technology giant Amazon moved up to third (50.6) despite noting a decline in its year-on-year brand health score. On the other hand, Amazon’s video-on-demand streaming service Amazon Prime strengthened its brand health perception over the year, making an entry into the top ten list in fifth (36.0).

Another new entrant on the list is Samsung. The technology behemoth has made large strides over the past year, securing itself a place in the 2021 top ten rankings (32.4).

E-commerce giant Flipkart has moved up three places in the rankings to sixth (35.9), with a marginal improvement (of +0.6 points) in its year-on-year brand health score. MakeMyTrip has also moved up one place to seventh (35.2) despite witnessing a decline (of -1.9) in its brand health score compared to last year.

Dettol Soaps completes the top ten list, consolidating its position amidst the pandemic, climbing up two places to eighth in the 2021 rankings (34.8).

The rankings also show the brands which have improved the most over the past 12 months. Telegram is the most improved brand of the past year, with a change in score of +6.2. 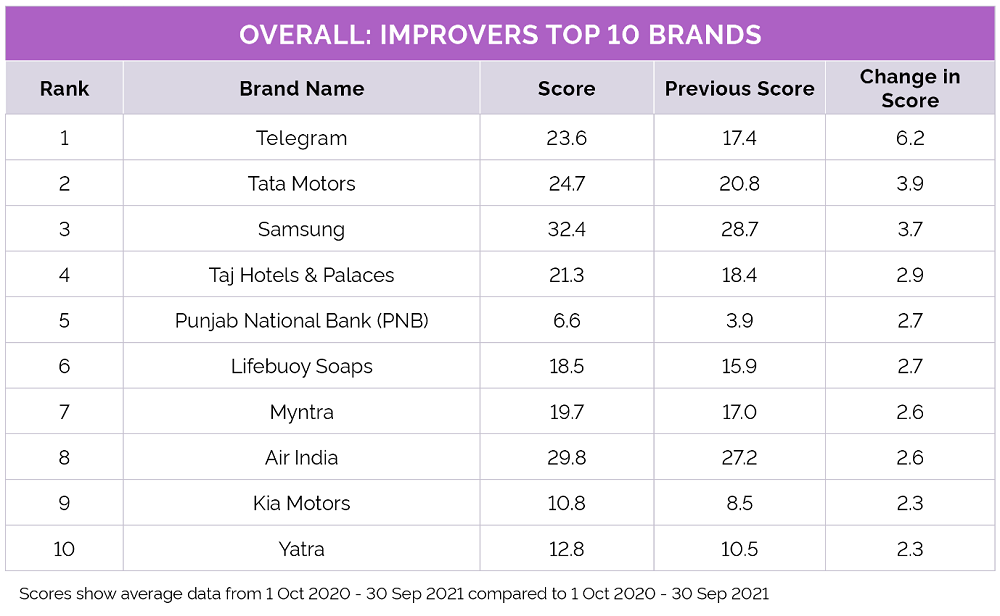 With travel restrictions easing and vaccination rates improving in India, it is not surprising to see Hotels and Booking companies appear in the list of most improved brands. Taj Hotels & Palaces took fourth place (+2.9), followed by Tata acquired Air India in eighth (2.6) and Yatra in tenth place (2.3), respectively.

The brands in YouGov Annual Rankings were ranked based on the Index score, which is a measure of overall brand health calculated by taking the average of Impression, Quality, Value, Satisfaction, Recommend and Reputation.

The Index Rankings chart shows the brands with the highest average Index scores between October 1, 2020 and September 30, 2021. The Index Improvers chart ranks the brands with the highest increase in Index, comparing scores from the previous 12-month period. To be included in the improver list, the variance must be positive. Both scores are representative of the general population of adults 18+ (some are online representative).

All Index scores listed have been rounded to a single decimal place; however, we have used additional precision to assign ranks.

Get in touch to know more